Rainbow Trust to feature in Life in Lockdown: a special film for BBC Children in Need narrated by Emma Willis

Rainbow Trust to feature in Life in Lockdown: a special film for BBC Children in Need narrated by Emma Willis 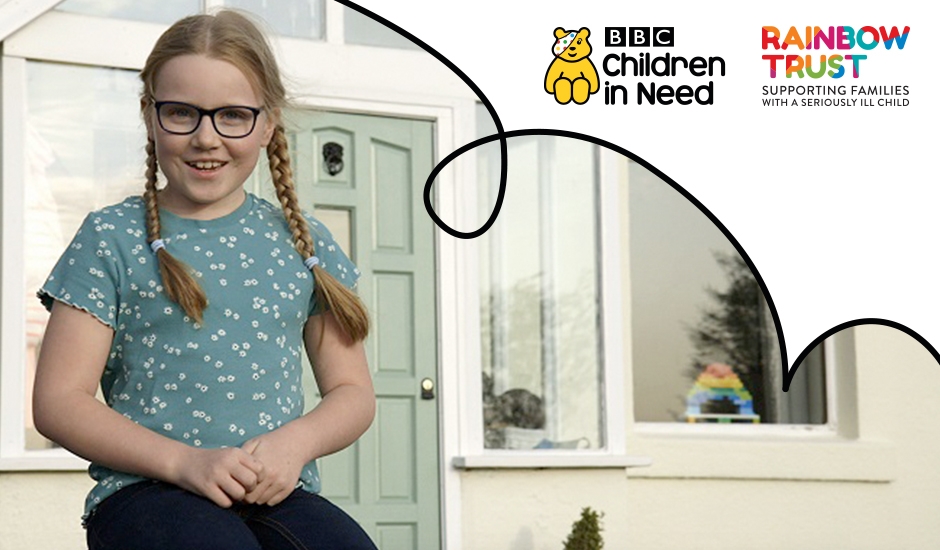 Rainbow Trust will feature in Life in Lockdown, a powerful, uplifting and touching film which proves how brilliantly resilient children and young people can be in the face of a global crisis. Narrated by Emma Willis and captured during early Autumn 2020, the film will shine a light on children and young people experiencing a variety of challenges, as they cope with the effects of the pandemic. Coming to BBC One on Wednesday 11 November at 7.30pm the film reveals how BBC Children in Need funded projects are providing vital support for families during this incredibly difficult time.

Beatrice, age eight, whose little sister Rosalind (Rosie) died from cancer a year ago features in the film. As Beatrice and her family who live in Ramsbottom headed into lockdown in March, they were also dealing with the many challenges of bereavement. Rachel, a Family Support Worker from a BBC Children in Need funded project here at Rainbow Trust, has been hosting virtual play sessions with Beatrice to help her cope. The film follows Beatrice and her family as they prepare to mark the first anniversary of Rosie’s passing, Beatrice wants to take the family up the hill where they scattered ‘Rosie dust’ where she dances and plays Rosie’s favourite song.

Our team in Greater Manchester benefits from a three-year grant of £87,746 to employ a Family Support Worker to support families affected by serious childhood illness - as well as an 18 month Covid-19 response grant of £79,980 to provide essential support for children and young people affected by serious childhood illness during the coronavirus pandemic.

“It’s wonderful to have the opportunity to show how BBC Children in Need funding helps charities supporting families with seriously ill children. Despite all the dramatic changes we’ve experienced over the past eight months, I’ve been able to provide consistent and reliable one-on-one support to Beatrice. It has been such a difficult time for her and her family and I have seen the difference it has made to her to have consistent one-to-one support to help her process her feelings and emotions.”

“Rachel has truly been a lifesaver in helping Beatrice through this time. We’re so grateful to Rainbow Trust for all they have done for us, thanks to the funding from BBC Children in Need, we have received the support we needed, when we needed it most. We look forward to watching the film and hope people across the UK are encouraged to tune in and donate.”

“The current pandemic has affected all of our lives, but some families have additional and complex needs and challenges outside of Covid. Being part of this documentary, I was able to see just how vital BBC Children in Need’s funds are to families across the UK in times of crisis. People are facing incredibly challenging times but I hope the public tune in and donate if they can to a much needed cause.”

Life in Lockdown was created by award winning film maker Anna Hall, Executive Producer at Candour Productions, Director Amy Richardson and Beejal Patel, BBC Commissioning Editor Factual. The film will air on BBC One during BBC Children in Need Appeal Week on 11 November at 7.30pm. Those interested in finding out more about BBC Children in Need can visit bbc.co.uk/Pudsey.

Read more about Bea and her family here.

For more information on the bereavement support that Rainbow Trust offers, please visit our support pages.