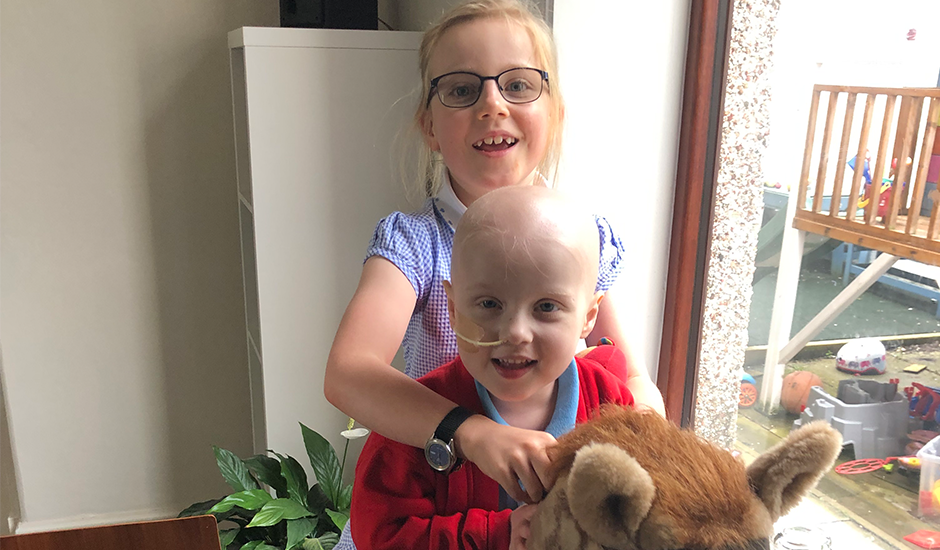 Since Rosie died, aged four, of a very rare abdominal cancer in November 2019, her parents Annette and Ray have been determined to keep her memory alive for Rosie’s seven-year-old sister Beatrice and to give something back to Rainbow Trust and other charities which have helped them.

Rosie was diagnosed with Rhabdomyosarcoma when she was two. After a long treatment programme, she was declared in remission just after her third birthday. The family enjoyed a seven month period of Rosie in remission, starting school and enjoying a normal life. But, in January 2019, they received the blow that the tumour had grown back. Rosie endured more treatment and again was declared in remission. Within a few months the tumor was back a third time - and this time it was multiple aggressive tumours. Sadly, it was terminal and there was nothing more that could be done. Rosie died three weeks later.

Annette and Ray first heard about Rainbow Trust from a family they had met on the hospital ward who were also being supported by us. They say they wouldn’t have coped without their Rainbow Trust Family Support Worker, Rachel.

Rachel has been instrumental in helping Beatrice and the whole family come to terms with Rosie’s death. Reminiscing about Rosie and talking about her with Beatrice helps them keep her memory alive.

Rosie’s bedroom has become Beatrice’s bedtime reading room and they are making a furniture chest with her name engraved on it. Annette takes in Rosie’s old books to read to her former classmates - and she and Ray have taken part in various sporting challenges and charity fundraisers in Rosie’s name, including the Three Peaks, Manchester Marathon and a 10K race in May for Rainbow Trust, as a thank you to Rachel.

During Rosie’s illness, Annette and Ray were exhausted and struggling mentally. Rachel provided an outlet for Beatrice to talk things through which made a great difference. Ray said:

“I needed to make sure she would be ok. The worst thing that could have happened would have been for Beatrice to have a sick sister and for it to ruin her life. Rachel came more regularly when she knew it was terminal - and one of the most important things she did was to come to the funeral. Beatrice really needed that. We needed someone there who knew our child. Beatrice helped carry Rosie’s casket in, stood with us during the eulogies and then disappeared with Rachel when she needed a break. Rachel gave Beatrice that opportunity to be a child again.”

Rachel now works through bereavement activities with Beatrice, such as the Muddles, Puddles and Sunshine book, encouraging her to talk about Rosie and her grief. Beatrice then discusses the activities with Annette and Ray at the weekend. Rachel has also given Beatrice a ‘worry monster’ teddy, which has a zip mouth for Beatrice to put her worry notes in, so that the monster can 'eat' them over night.

On her weekly visits she talks to Beatrice about feelings of loneliness and coming to terms with Rosie’s death and gives her coping strategies to help her manage her emotions. Beatrice says:

“I made a coloured salt jar of memories with Rachel and a ‘feelings volcano’ where I put my thoughts inside. I feel lonely sometimes when Rachel is not here. Seeing Rachel makes me feel better."

Reminiscing about Rosie, the whole family describe her as sassy, cheeky, funny little girl who loved olives and strawberry and vanilla ice cream. While they miss her desperately, they are relieved her suffering is over.

Rachel has helped Annette, Ray and Beatrice to talk about Rosie and bereavement. They say:

“Through no fault of their own, friends and family often don’t have the words to express their feelings about Rosie’s death and Rachel has helped immensely to bring that out. Rosie was a funny little thing and we love to talk and laugh about her.

“Working with Rainbow Trust has helped to give Rosie’s life meaning. She only lived for four years, but she’s done a lot of good in that time.

“We couldn’t get through it without Rachel and Rainbow Trust. We know Bea is going to be ok and that is thanks to Rachel.”

We provide bespoke, continued support to families who have experienced the devastating loss of a child. Please donate today, so that we can be there for more families, like Rosie's.

Continued support for as long a family needs us

The loss of a child is the hardest thing any parent can experience - but they don’t have to go through it alone.

We provide bespoke continued support to families, helping to negotiate life after a bereavement. We offer emotional support to the whole family, including support to siblings, at the hardest time.