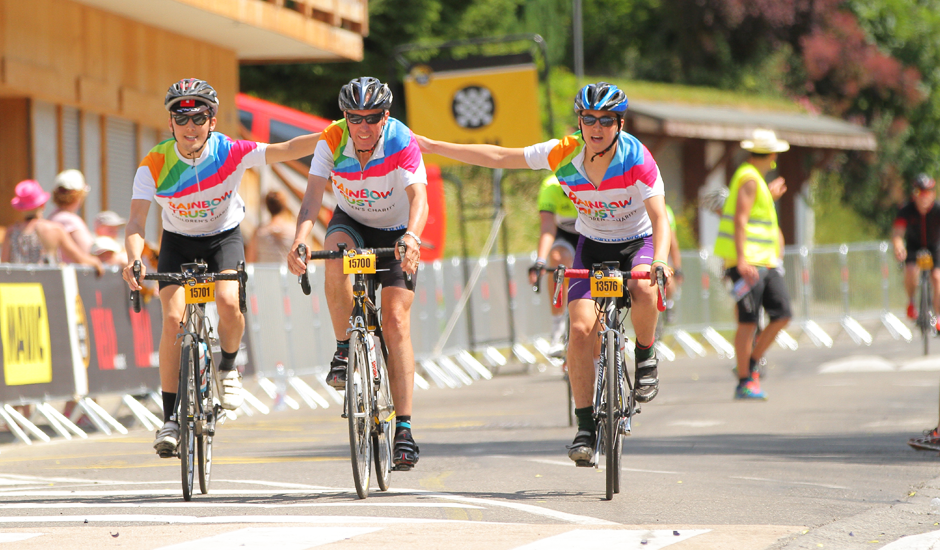 A family from Alresford, Hampshire have so far raised over £14,000 for Rainbow Trust Children’s Charity, which supports families caring for a child with a life threatening or terminal illness.

Matthew Morton, 56, and his two sons, Alastair and Patrick aged 22 and 19, took part in the Etape du Tour, which challenges participants to ride one of the toughest mountain stages of the Tour de France with an intense 3,335 metres of climbing. The three cyclists set off on 10 July from Megève, South-Eastern France, and covered 146 km to the finish line in Morzine.

As well as the family’s terrific cycling efforts, the boys’ mother and Matthew’s wife, Rosebie is also fundraising for the charity through her award winning online florist, The Real Flower Company. The company, which creates luxury flower bouquets, is donating £2 from every sale of its ‘Rainbow Trust Charity Bouquet’ until the end of September.

The money raised will help Rainbow Trust’s network of Family Support Workers support families with a seriously ill child at home, in the community or in hospital, in whatever way they can to make life a little easier.

“I’ve been involved in challenges previously but this was a first for the boys so it was a real challenge. I felt that doing the event with my two sons who are fortunately very healthy was a great privilege. The least we could do was to raise money for families who are less fortunate and are dealing with a major crisis in their lives. We chose to raise money for Rainbow Trust to motivate us to push up every hard mountain climb and to support a wonderful organisation.”

“As a company, The Real Flower Company each year chooses a charity to support and we felt it would be very apt this year to support Rainbow Trust and create a rainbow coloured bouquet, using as many brightly coloured scented flowers as possible. The bouquet has been really well received and we are hoping to have raised a bit more money to contribute to what the boys have achieved with the Etape. I was a very proud wife and mother watching my family come across the finishing line having completed a serious challenge. Bouquet making was definitely the easier option!”

“It’s really great to see Matthew and his two sons challenging themselves by taking part in the very tough Etape du Tour. We want to thank them and Rosebie who is raising funds through her beautiful online florist. We have a care team in Southampton which supports local families across Hampshire and the region, so this money will really help these families with a seriously ill child receive the vital support we provide.”

To sponsor the family please visit their fundraising page.