Bernard takes on his third RideLondon for Rainbow Trust

Bernard takes on his third RideLondon for Rainbow Trust 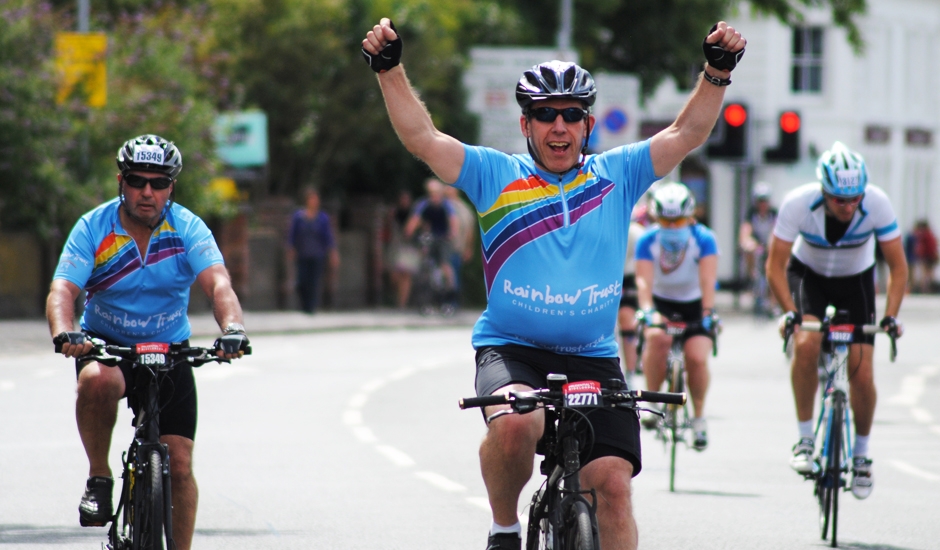 Bernard Bunting, 57 from Fulham, will be taking on his third RideLondon-Surrey100 bike ride on Sunday in support of Rainbow Trust. These days Bernard, pictured above during the event in 2013, does it for more than the thrill of the challenge. He’s fallen in love with cycling and has made it a much more regular hobby, embracing the positive impact it’s had.

“As a result of this exercise and a change to a more healthy diet, I have lost 7kg over the last 6 months.”

In preparation for this year’s ride, Bernard joined a London cycling club to ensure he kept up rigorous training. He now clocks up around 300km on his bike every week, in comparison to the 50km he used to manage in 2013.

RideLondon-Surrey 100 is a gruelling but scenic 100 miles, on closed roads through London, Surrey’s Hills and back to the Capital. Bernard will be part of our biggest RideLondon team yet, joining 89 other Rainbow Trust riders as they take on the Olympic legacy ride.

Bernard, Managing Director of Perry Uniform, manufacturer and retailer of school uniforms, began supporting Rainbow Trust in 2013 as the care we provide to families resonated amongst the company’s staff. Ever since then he has put a lot of effort into fundraising and training, raising £2,900 from RideLondon so far and he’s hoping to raise another £1,500 this year.

When talking about why he chooses RideLondon over other cycle challenges, Bernard says:

“The opportunity to ride through London on closed roads is fantastic but in particular I love the sweep through Trafalgar Square as Nelson is my boyhood hero! Crossing the finish line is always a blur with lots of cheering but after over four hours in the saddle, I just focus on the clock above the finish line and once you cross that line, you get a real sense of achievement.”

Bernard was also a great help to us at one of our RideLondon training days, where he led a group of eight other riders from the team. He said: “The training day was great and I was able to pass on some of my experiences of the exciting race.”

“Bernard has put so much hard work into supporting us over the years. It’s down to the generosity of people like him that we are able to continue raising vital funds to support families in need. We will be there on the day to cheer for him and all of our cyclists during the race.”

Inspired by Bernard’s transformation? Take on a challenge yourself and work towards a personal goal. Get in touch with us at [email protected]