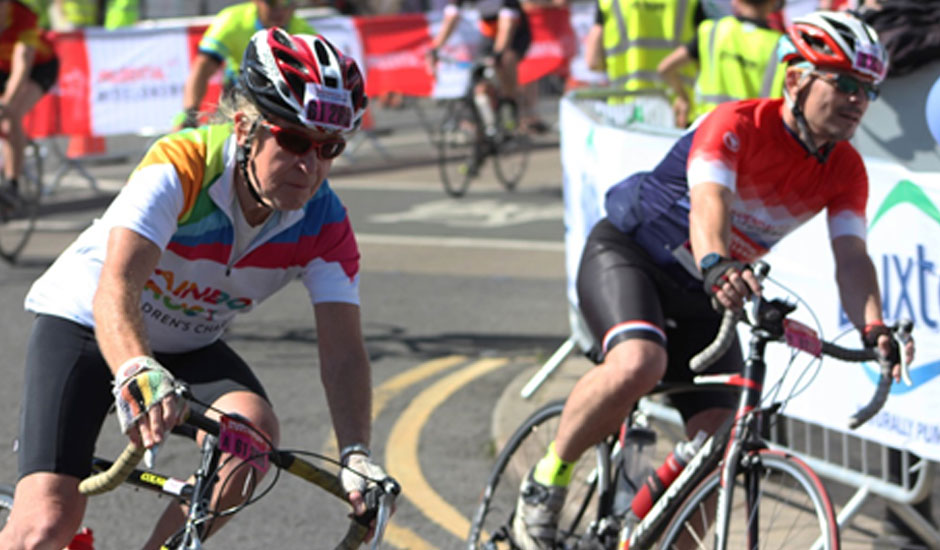 Nearly 50 supporters of Rainbow Trust Children’s Charity, took part in the RideLondon event on Sunday 31 July. So far the riders have raised a grand total of £34,800.

The challengers began their 100-mile challenge at the Olympic Park in East London, passing through Central London into the Surrey countryside and finally completing the route in Westminster. With a total of 48 cyclists and cheering support from the Rainbow Trust team, who were positioned in Surbiton, Leatherhead and Dorking, the challenge was a huge success.

Bernard Bunting, 58, from Fulham, completed his fourth RideLondon for Rainbow Trust who are celebrating their 30th Anniversary this year. The charity provided two specialist training days for the riders in preparation for the demanding Surrey hills. As with all the cyclists, Bernard aimed to raise as much money as possible for the charity and describes the experience as “exhilarating, inspiring and exhausting.”

“RideLondon is a unique opportunity to cycle on car-free roads through London and the beautiful Surrey countryside and one which I would recommend to anyone. The camaraderie with other riders along with the support of spectators got me through the pain barrier and helped to keep going to the end.

“I was delighted to be able to support Rainbow Trust through my efforts at RideLondon knowing that the money I was able to raise will go towards supporting families with children with terminal illnesses.”