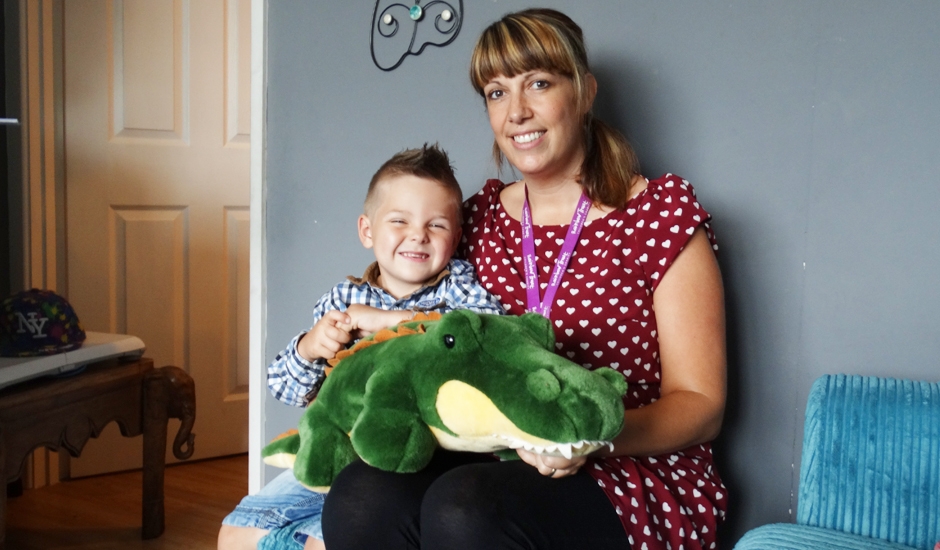 On Sunday 3 June families around the country will celebrate National Cancer Survivors Day and none more so than the Kemish family from Totton whose eight year old son McKenzie reached the milestone of being five years cancer free in December 2017.

The family celebrated at the time and McKenzie wore a specially made T-shirt to school celebrating his cancer free status. They are now preparing to celebrate again to mark National Cancer Survivors Day and to thank Rainbow Trust Children’s Charity who have supported the family since McKenzie was first diagnosed with stage 4 Neuroblastoma in October 2011, when McKenzie was just two years old.

“We were introduced to Dawn, one of Rainbow Trust’s Family Support Workers, in the hospital playroom just six weeks after the diagnosis, and she asked us how she could help. I told her I wanted someone to play with McKenzie’s brothers and sisters and bring some fun back into their lives. Dawn and the children clicked immediately.

“The time Dawn spent with the children meant I could do simple tasks like the shopping without having to take the five children along. Or when McKenzie was in hospital – sometimes for months at a time - Dawn was an invaluable extra pair of hands at home and enabled my husband and I to have important conversations without distractions.”

“Thanks to Dawn and support from Rainbow Trust, the isolation felt by many families with a seriously ill child was removed and we were given precious time to focus on creating happy memories as a family. She not only kept us optimistic but provided much needed practical and emotional support to all of us.”

“National Cancer Survivors Day is a wonderful day of celebration and provides a great platform for Rainbow Trust to raise awareness of the work we do to help families who are caring for a child with cancer. We are delighted that McKenzie is now officially cancer free and we will continue to support the Kemish family in whatever way they feel best.”