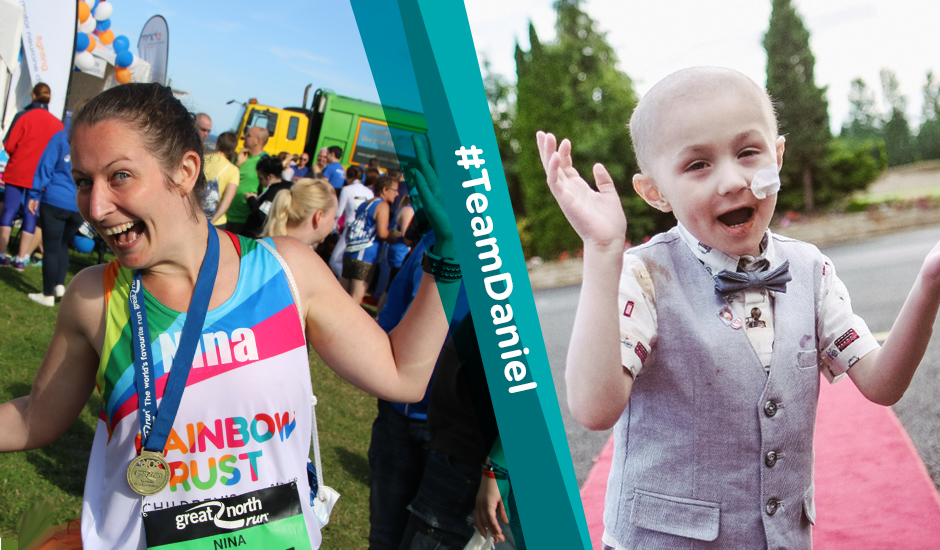 A five-year-old boy from County Durham who is in remission from cancer is fronting our appeal, calling on people to take part in the iconic Great North Run in Newcastle-upon-Tyne on 9 September.

Aptly named Daniel Rainbow and his family, from Stanley, are appealing to people to sign up to the half-marathon and join ‘Team Daniel’ along with his mum Claire and other family members, to help raise funds for families like theirs who are supported by Rainbow Trust.

Rainbow Trust is encouraging runners without a ballot place to sign up for the 70 places up for grabs on ‘Team Daniel’. Ballot runners can also join ‘Team Daniel’ by raising sponsorship for Rainbow Trust. Competitors need to raise £300 each and pay a £40 registration fee. Rainbow Trust will provide each runner with a Team Daniel running vest and will have cheering squads at the event. Runners will also enjoy a post-race reception and massage and will receive a thank you card designed by Daniel.

The 13.1-mile race spanning Newcastle, South Shields and the North Sea coast, attracts some 57,000 runners each year including celebrities, wheelchair-racers and fun-runners and is filmed live on the BBC.

The money raised from Team Daniel will help families, like the Rainbows, who are supported by Rainbow Trust. The charity enables families who have a child with a life threatening illness to make the most of their time together by pairing each family with an expert Family Support Worker who helps them at home, in hospital and in the community, for as long as it is needed.

Daniel’s family have filmed a video wishing runners good luck and talking about the help they have received from Rainbow Trust.

“We would really encourage people to sign up to Team Daniel. Rainbow Trust understands what we have been through, what our life looks like and what it feels like having a child with a serious illness. I couldn’t do without them now. If it wasn’t for our Family Support Worker Sabrina’s encouragement to speak to other parents, I’d never have spoken to anyone.”

Daniel was diagnosed with neuroblastoma when he was two years old, just three days before Claire and her husband and Daniel’s dad Michael found out she was pregnant with Daniel’s younger sister Emily, who is now two years old. The family was referred to Rainbow Trust Family Support Worker Sabrina soon after Daniel’s diagnosis and she has been supporting the whole family.

Claire said Daniel withdrew into himself after his diagnosis but he bonded with Sabrina straight away. She helps with hospital appointments and sits with Daniel for a few hours while Claire and Michael speak to consultants or have a coffee break.

Daniel has recently spent two weeks in hospital with a chest infection and Daniel was feeling very anxious so Sabrina supported him and his parents in hospital.

“Sabrina reassures me about stuff which is invaluable,” Claire said. “Daniel adores her. She plays with him and he has so much fun with her, which is so lovely to see.

“I’ve needed someone to talk to who understands what we, as a family, and me as a mum, is going through. I’ve gone to coffee mornings at the hospital and just having that time and space to talk to other parents has been so helpful. It helps me feel less isolated and more supported knowing and meeting others who are going through the same as us.

“I felt that if I left Daniel’s room and spoke to other parents then it was real, that the nightmare we were living was our life now. For a long time I thought today would be the day the doctors would say, ‘Sorry Mrs Rainbow, we’ve made a mistake and got it all wrong.’”

Unfortunately, people with neuroblastoma can have a high tendency to relapse but Daniel has been in remission for eight months now and is doing very well.

“Life without Sabrina, I’m not sure this is something I could ever imagine,” Clare said.

“The Great North Run is one of Rainbow Trust’s biggest events of the year and we are extremely grateful to Daniel and his family for backing our appeal calling for people to sign up for it. Money raised from the event will enable families with a seriously ill a child to make the most of the precious time they have together.”

Read more about Daniel and his family, here.