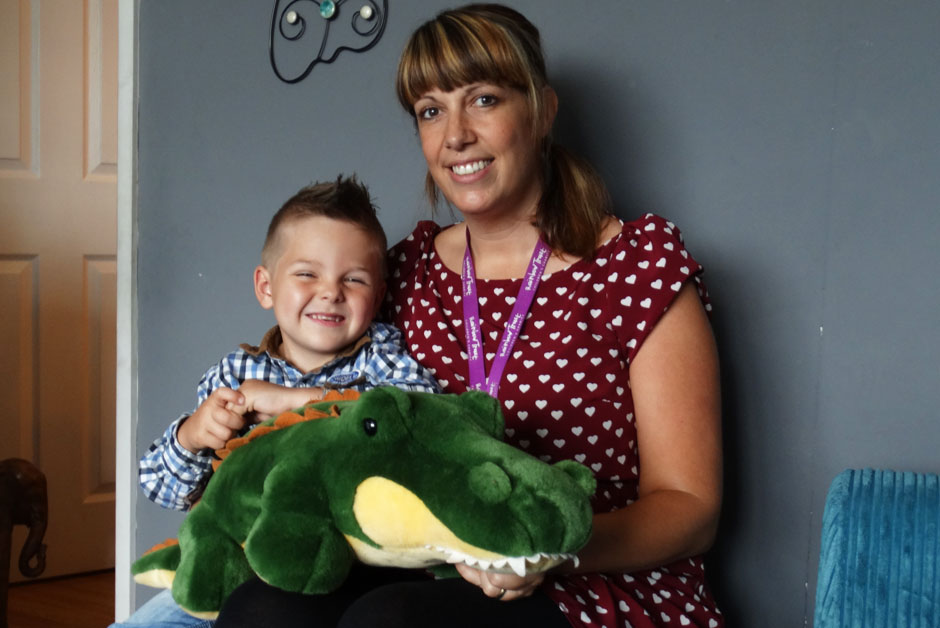 In August 2011, two year old McKenzie Kemish, from Totton, fell off a chair and did what most boys do, he cried for a minute, then carried on playing. When his mum, Amberley, went to change his nappy, he screamed in agony. Throughout the day, she noticed he had a stiff neck which she assumed was from the fall. Amberley and her husband John, took him to Lymington Casualty where doctors said he had tonsillitis and could go home.

Weeks later, McKenzie was still not right and after numerous visits to the hospital, Amberley noticed that he couldn’t turn his head and had a pea sized lump on the side of his neck. In October of that year, McKenzie was diagnosed with Stage 4 Neuroblastoma, a rare form of cancer. Life for the Kemish’s has not been the same since.

Rainbow Trust Children’s Charity is using the extra hour given to us when the clocks go back on October 26th to remind people of the importance of an hour of family life and encourage others to use that time wisely. For McKenzie’s mother, Amberley Kemish who also has four other children, time means everything to her and her son.

McKenzie underwent chemotherapy until the end of March and was kept in hospital for 11 months. He was also diagnosed with atypical HUS, a disease that destroys red blood cells and causes kidney failure in children. He underwent six months of chemotherapy, then surgery, then radiotherapy. The chemotherapy had to be stopped as his body had begun to shut down, “If we’d given him one more dose of chemotherapy, we’d have killed him,” says Amberley.

In September of that year, McKenzie had further treatment to protect his kidneys, but the family are aware that he will eventually need a transplant.

McKenzie is the only person in the world who has this condition - most people with HUS recover but McKenzie won’t. “We’re very lucky, a lot of McKenzie’s friends on the ward have passed away. We’re lucky to have made it this far, we just don’t know what tomorrow will bring.” The family are exceptionally positive and see each day as a blessing. Amberley remembers when McKenzie was first diagnosed and given a 40% chance of survival and another mother on the ward said, “‘40%? That’s amazing!’ I looked at her and thought, you’re right, even 1%, you have to cling to it!”

The Kemish’s were referred to Rainbow Trust’s Southampton Family Support Worker Dawn and she asked them what kind of help she could provide. Amberley told her she’d like someone to spend time with her children and, “bring some fun back into their lives,” since they’d lost that with McKenzie being so ill. Dawn visited the family’s home and played with the children who immediately ‘clicked’ with her. “They all just love her” Amberley says.

The time Dawn spends with the children allows Amberley to go shopping without having to drag all five children along. If McKenzie is in hospital, Dawn helps out with the other children. “One day she told John and me to go and have a meal, just us two, we never get to have time to do that.”

As well as playing with the children, Dawn provides the family with emotional support, “If one of the older girls is struggling emotionally, I call Dawn to come and have a chat with her” Amberley recalls. “She has been very supportive throughout McKenzie’s illness and helps the family stay optimistic”.

Older sisters, Memphis and Missy, wanted to give, “something back to the other sick children,” so have been fundraising for Rainbow Trust. They have planned a non-school uniform day where children go to school in rainbow colours and they’ve organised a cake sale. Their latest idea is a Big Tea Time in line with Rainbow Trust’s, ‘The Big Hour’ campaign. On 22 October, the New Inn pub in Hounsdown has agreed to let them run a fun day with a raffle, games, cake sale and refreshments, all in aid of Rainbow Trust (full details below). The girls hope to raise as much money as possible. “…the biggest support [for us] has come from Rainbow Trust and we are going to try our hardest and anything will be a bonus, won’t it?” says Amberley.

The charity is encouraging people to take part by using that extra hour gained to make a difference by baking various tasty and creative treats for a tea time from 20-26 October in order to help raise vital funds for those in need. Currently, Rainbow Trust supports over 1,600 of these families each year.

For further details on how to register for ‘The Big Hour Tea Time’, visit www.thebighour.org.uk