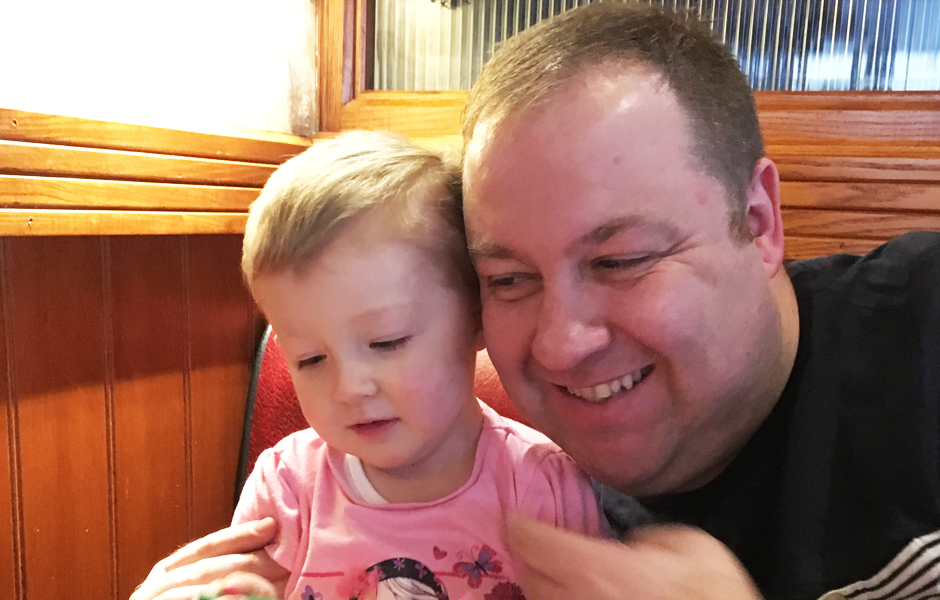 Our North East team supports Darren Frazer whose daughter was diagnosed with a brain tumour before she was two years old. Leanne Cummins, a Family Support Worker from the team, supports him and his family. Here Darren tells us what it’s been like for him as a dad and how Rainbow Trust has made a difference to him and his family’s lives.

We can’t plan too far in advance but if Grace is well, we will go out for lunch and have some nice family time for Father’s Day and for me, that’ll be the best day. Grace was 18 months old when she was diagnosed with a brain tumour. She had been fine up until then. She was one of those children who went straight from crawling to running so when she started falling over, we thought she was just clumsy. She became less mobile and then she started having tantrums so we took her to a paediatrician but he couldn’t find anything wrong. It wasn’t until she was sick at nursery that she was rushed to A&E where they did a brain scan and we were told that Grace had a brain tumour.

It all happened so quickly – she was diagnosed on the Tuesday and on Wednesday had brain surgery to remove the tumour. She was in Paediatric Intensive Care Unit and had her Hickman line, a venous catheter, inserted ready for her six months of chemotherapy to start a month later. Watching her go through the treatment was really hard, the worst possible thing is you know it’s this terrible poison going into her body and it drained her. She was so tired. Twelve hours after the operation Grace bounced back. She hadn’t been able to move for so long that as soon as the pressure was released, she was able to move again and she bounced everywhere. She was so happy to be able to move again.

Fiona, my wife, and I had to restrict her movement as she had a Hickman line so we had to try and keep her still and stop her from jumping around. We’d set her up in front of the telly playing games with one our phones but it went against what we wanted for her. We’d rather she was out in the garden running around and playing but for her own protection, we had to keep her still. We were assigned a CLIC Sargent worker who sat down with us and told us what we were entitled to and who could assist us but Fiona and I were still trying to take it all in. It was just too soon for us. It wasn’t till further down the line when one of us would stay at the hospital from 9am to 7pm then go home. The other one would then stay overnight so the next morning so we were exhausted. Fiona spoke to Vikki, one of the North East Family Support Workers who was at the hospital drop in group about Rainbow Trust Children’s Charity helping us. Leanne from the North East office started supporting us. She takes Grace out for a couple of hours to the park or soft play. It gives her some fun time and it gives Fiona and I a break to do housework or go shopping or even just sleep. It is such a help, I honestly don’t know where we’d be without Leanne.
When Grace was first diagnosed, both Fiona and I were working but then I was made redundant. I felt like a failure, I am so used to providing and doing everything for my family and I wasn’t even bringing in any money. I just felt I had to go out and get something. I was diagnosed with depression, anxiety and stress as it was all just too much.

“The worse thing about cancer is that you have no control at all. With most things you do; if Grace has a cold, I can wipe her nose, but with a tumour I can’t do anything to stop it. I feel useless and I like I’ve failed her as a dad.”

Now I’ve learned I have to take care of myself and can feel when I haven’t. I was recently rushed to A&E with a suspected heart attack. It wasn’t but it was a severe anxiety attack. I’ve changed so much, I used to be so strong, not much used to affect us, now I break down often. The first time that Grace lost her hair I broke down and had to leave the room. But now I have changed the way I live my life, now I live for today and not tomorrow. Because of Grace’s illness, I’ve got to be positive and not doom and gloom. Fiona and I always shared everything but now Fiona does more of the hospital visits etc. She has taken a break from work so I have to earn two wages taxiing but I feel guilty that she has to do all of the visits and hospital stays. I want to be able to be there for her and Grace – it is so hard and it’s mentally draining worrying all the time.

I decided to be a taxi driver so that I could work around Grace’s treatment schedule. If she or Fiona needs me I can be there. I studied as hard as I could and started taxiing in October 2015 and it works so well for us. I can be there for my family when they need me.

I would definitely recommend Rainbow Trust and I have. I’ve told people how fantastic and brilliant our Family Support Worker, Leanne is. We’d be lost without her. We can both talk to her and she knows so much about this sort of thing. She offers so many options and thinks outside the box, I can’t praise her enough for all that she has done for us. Talking to her is such a helpful release for us, she listens and the best thing is, she cares. She treats Grace like her own.

“I told someone on the ward the other day that the positive out of Grace’s cancer is Leanne and Rainbow Trust.”