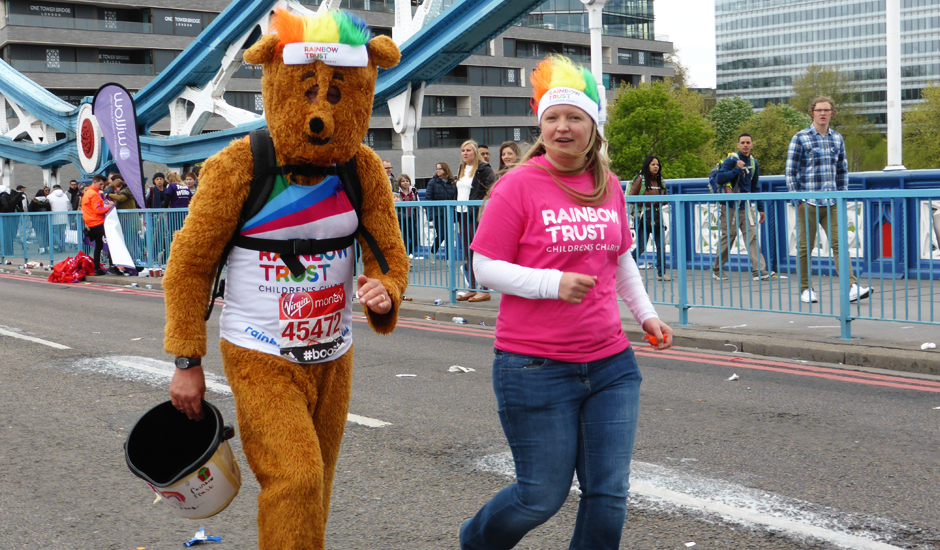 A father from Doncaster who has run 64 marathons for Rainbow Trust after his teenage daughter died of cancer, has said it is vital that more volunteers help the charity.

Fred Tomlinson, aged 67, from Hatfield, South Yorkshire, has raised £49,687.98, for Rainbow Trust, helping us to support families who have a child with a life threatening or terminal illness.

Speaking out ahead of Volunteers’ Week, which runs from 1-12 June and celebrates volunteers’ contributions across the UK, Fred said raising awareness made an enormous difference.

“There was nothing like Rainbow Trust when my daughter Claire was ill,” he said. “We relied on relatives, neighbours and friends. It’s vital. There are times where there’s absolutely nowhere you can turn to and you need organisations like Rainbow Trust you really do.”

Since Claire died 29 years ago, aged 15, Fred has run 64 marathons, including 24 consecutive London marathons in aid of the charity, after first hearing about it in a magazine.

He has also run numerous local half marathons and 10k races for Rainbow Trust.

To raise as much awareness as possible Fred has run in a range of costumes including Rainbow Trust’s mascot Bungle, a duck and even in his old police officer uniform.

“The kids absolutely love the costumes. If you are dressed up you get more money. I run at a steady pace and collect money as I go round. It’s not a problem in the Bungle suit.”

Fred has also completed marathons in Hannover in Germany, York and Manchester. In September he has another York marathon.

Memories of his daughter and knowing that he is running to help other seriously ill children spur Fred on. His other daughter Laura, 34 and his son Paul, 41 have also run in aid of Rainbow Trust.

“I know I could pull out of a race at any time but these children having treatment can’t have a day off. When I start a race, I’m going to finish it. I would just encourage everybody to volunteer their time for Rainbow Trust. It makes such a difference. The more money and support they have, the more people they can reach. If more people knew about Rainbow Trust, more people would volunteer. It’s vital. I hope Claire would be proud of me.”

“Fred’s support as a volunteer fundraiser for Rainbow Trust is absolutely incredible. Raising almost £50,000 is enough for us to support 30 families with a terminally ill child for a whole year. Fred’s energy and enthusiasm is second to none and we are so thankful to him for all the time and funds he donates to us.”

Rainbow Trust Children’s Charity relies on the support of its volunteers to operate. They fulfil vital tasks including office support, helping at events, fundraising, providing transport and supporting the care teams. In 2014/15, the charity’s 350 volunteers donated 34,687 hours of support. Using the living wage, this equates to an incredible £272,293 of donated time.

If anyone is interested in volunteering with Rainbow Trust, please call Andrea Kelley, Volunteer Development Manager on 01372 220043 or view our current opportunities.