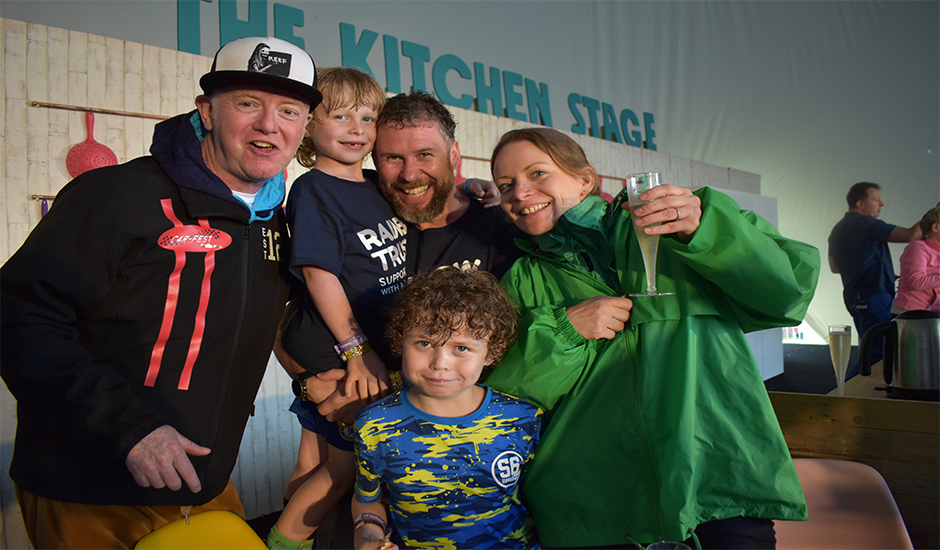 Singing on stage with the Rock Choir and meeting radio presenter and festival founder Chris Evans were among the highlights for Henry and his family from Redhill, Surrey who enjoyed a VIP welcome at CarFest North last weekend.

The fun began en-route to the event after some 50,000 festival goers received an exclusive downloadable car kit with top ten family car games, along with colourful bunting and posters. Our branded lorry and Berlingo car played an eye-catching role during the popular carnival, thanks to AST Transport Branding and Auto Windscreens for wrapping the Berlingo, which represents the fleet of cars used by our Family Support Workers, and to L Lynch Haulage for bringing the amazing branded lorry.

Rainbow Trust’s main base throughout the weekend was in the Tent of Inspiration where CarFesters met the our team and competed in a fun, bike powered head-to-head challenge. They also learnt more about the charity’s vital work by taking part in an engaging car treasure hunt at the Big Early and VIP ticket holders enjoyed playing in Plum Play’s wigwam in the garden.

Godfrey took to the stage to tell the crowds exactly how Rainbow Trust supports families with a seriously ill child. He described how our Family Support Worker Nicki has been supporting his whole family after Henry, who is awaiting a new kidney from his donor dad, was born with a rare condition, Posterior Urethral Valves, which means he has severe kidney damage. Nicki provides respite for the parents and sibling support for Henry’s younger brother Thomas when Henry is often in hospital.

“It was brilliant. After I spoke on stage about Henry and how Rainbow Trust has helped, there were lots of people in tears who came up to me afterwards. Thomas went up on stage and talked about how Nicki had helped them and how they enjoy playing nerf guns together. He even got the chance to try out the drums that the band Texas had been playing.”

The family joined the Rock Choir on stage to perform Katy Perry’s Roar and Labbi Siffre’s Something Inside So Strong as part of a grand finale to soaking wet but eager crowds on Sunday evening.

“It was such an amazing experience and the boys loved it. We are really grateful to CarFest and Rainbow Trust. On Sunday, we couldn’t stop smiling. The highlight was singing in front of that many people, which was amazing support for Rainbow Trust.”

“We are so grateful to Godfrey and his family for all their support over what was a fabulous weekend. Hearing Godfrey talk about the difference Rainbow Trust has made in front of so many people was fantastic and a wonderful opportunity to raise awareness of our work. We would also like to thank AST Transport Branding, Auto Windscreens, Plum Play, Projects Group and L Lynch Haulage for supporting us.

“We are thrilled to be a charity partner for CarFest 2019. It has given us the opportunity to reach tens of thousands of people to grow support for Rainbow Trust, and the funds we receive will make a great difference in helping families like the Haires who are caring for a seriously ill child.”

Family festival CarFest created by radio presenter Chris Evans takes place in two locations across two weekends in July and August and has raised over £13.5 million for BBC Children in Need over the past six years.This year, BBC Children in Need remains CarFest’s principal charity partner and will receive 50% of the total funds raised. Rainbow Trust, along with Ellen MacArthur Cancer Trust, Starlight Children’s Foundation and Teenage Cancer Trust will each receive 10% of the total funds raised.

CarFest South takes place at Laverstoke Park Farm from 23 – 25 August. Full details of the line-up are available on www.carfest.org.