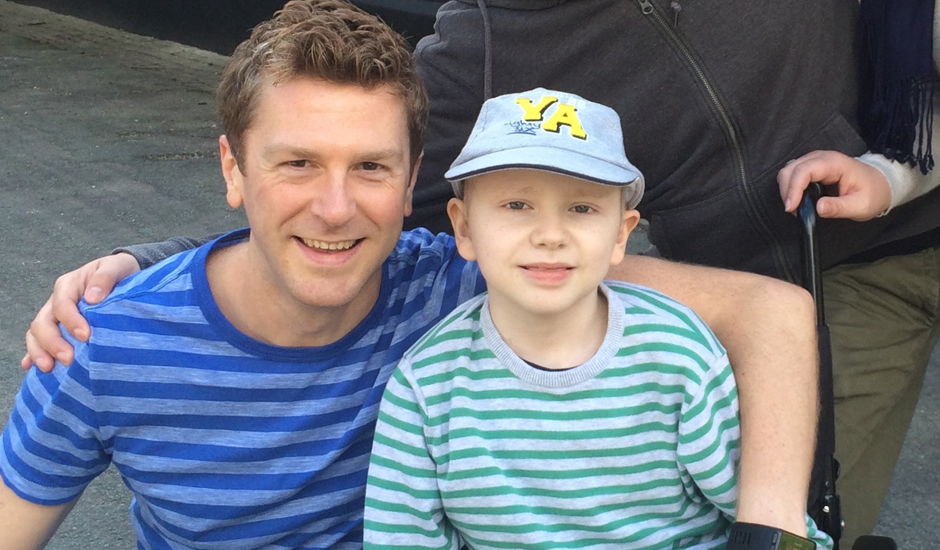 A Stockport man who is running the London Marathon in aid of Rainbow Trust Children’s Charity, which supports his nine-year-old nephew and family, described the charity as a real-life guardian angel.

Martyn of Heald Green, said the support Rainbow Trust has given his nephew Adam, Adam’s 13-year-old sister Megan and their Mum Clare has been vital.

Rainbow Trust supports families caring for a child with a life threatening or terminal illness through its team of nine Family Support Workers across England, including Greater Manchester, helping families at home, in hospital and in the community making life easier. It is this support that will spur on Martyn as he aims to beat his fastest marathon time of three hours and 27 minutes and cross the finish line in three hours and 15 minutes on 23 April.

Martyn said: “Rainbow Trust can get forgotten about. People always think of the medical help a seriously ill child needs, which is vital but equally vital is seeing the emotional and practical support Rainbow Trust gives Adam, Megan and Clare. Rainbow Trust is a real life guardian angel and if I can help them continue helping Adam and other families in the future then I will. I am very passionate about raising funds for something that has helped them so much. Rainbow Trust supports the whole family. It’s not just about Adam. Rainbow Trust recognises that Adam’s illness affects more than one person.”

Adam, also from Stockport, was diagnosed with a brain tumour when he was eight years old, and underwent treatment and surgery to remove it last year. He is recovering well and taking small unaided steps but the trauma of his illness has taken its toll on the brave youngster.

Rainbow Trust Family Support Worker Sean, from the Greater Manchester team, has been supporting Adam’s whole family since his diagnosis. Megan initially struggled with Adam’s diagnosis but now talks openly to Sean about it. Sean plays with Adam and has been a great support to Mum Clare, entertaining Adam in hospital so she could have a break.

Martyn has run nine marathons but this will be his first London event. He even joined in a leg of Benjamin Smith’s challenge which saw him run 401 marathons in 401 days in 2016. He is looking forward to the big day.

“I imagine the buzz and support will be great and I’m looking forward to meeting up with the other runners,” he said. “It will be an emotionally motivating experience.”

Martyn regularly takes Adam to the park as part of his recovery.

“When Adam was going through treatment there’s nothing you can really do apart from being there and visiting. Adam knows I have always been a keen runner and I wanted to be doing something he knows I enjoy. Adam is really touched that I am running.”

Emma Haines, Director of Marketing and Fundraising at Rainbow Trust, said: “We are extremely grateful to Martyn Jones and all our marathon runners for taking on such a challenge to raise vital funds. Martyn is right when he says that it is fundraising efforts such as this which make such a great difference is enabling us to help more families supporting families with a life threatening or terminal illness.

Rainbow Trust has 43 runners taking part in the London Marathon. Anyone with a ballot place interested in joining the team can fill in the online form.