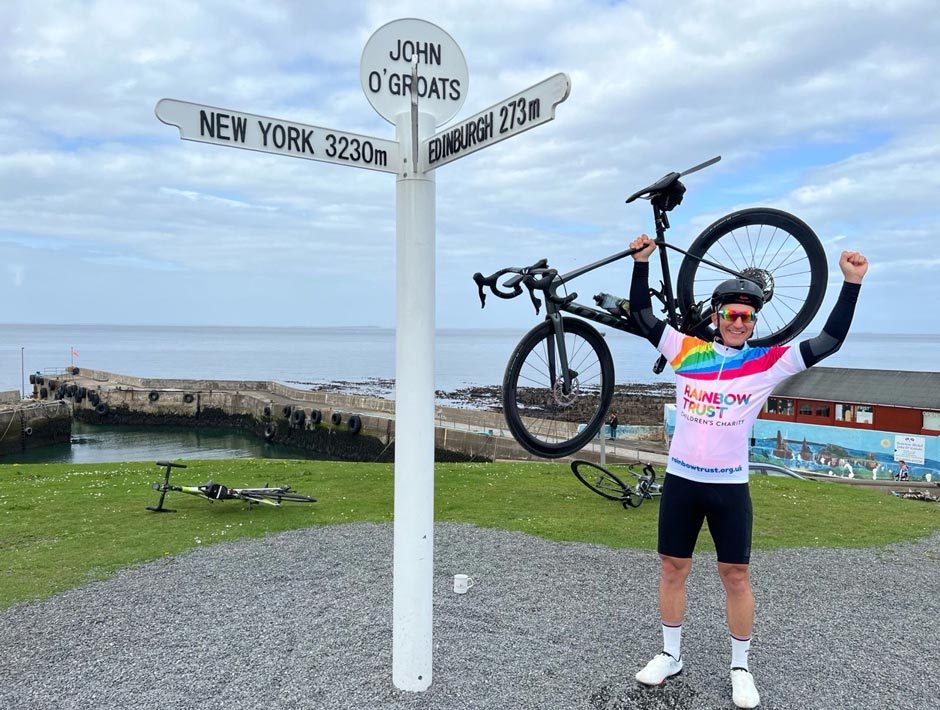 A Redhill resident has marked his 40th birthday by cycling from Land’s End to John O’Groats in just ten days and has raised over £6,000 for Surrey based children’s charity Rainbow Trust Children’s Charity which supports families with a seriously ill child.

Chris Girardi-Moore rode for ten consecutive days with his best friend Richard Patterson, covering an average 100 miles per day. They completed their gruelling challenge on Saturday 14 May.

Chris said; “It’s no secret I love to cycle and there’s always been one huge challenge I’ve aspired to undertake – the 1000 mile ride from Land's End to John O'Groats. So what better way to commemorate turning 40 earlier this year than taking on this feat whilst also raising money for such a good cause.

“Through my work at Arun Estates over the past 12 years I have been lucky enough to meet Godfrey Haire, an amazing man who has a personal connection to Rainbow Trust. The charity supported him and his family when his son Henry was born with a rare condition that required a kidney transplant. In September 2021 after waiting 11 years Godfrey was able to donate a kidney to his son and I'm delighted to say he is now in a stable condition. Godfrey has fundraised tirelessly for Rainbow Trust over the years and cannot thank them enough for the support they have given his family. His kindness is infectious, and this is my small way of paying back that kindness.”

Chris and Richard left Land’s End on Thursday 5 May with the aim of covering 100 miles a day over ten consecutive days – something that not only would test physical fitness but their mental strength too.

Chris said; “It’s not until I look at the map and the sheer length of the route, it dawns on me what I have achieved. I broke each day up into four 25-mile chunks which helped mentally and I am delighted that the donations I received reflect the scale of the challenge! I boosted funds by holding a raffle too and I am so grateful to the local companies and small businesses of Reigate for the prizes they kindly donated - I have been shocked and humbled by the level of support. Although I won’t lie, I found the final three weeks leading up to the event, when my focus was solely on fundraising, exhausting!”

Oonagh Goodman, Director of Fundraising and Marketing at Rainbow Trust said; “We are so grateful to Chris for his utter dedication and fundraising success. On behalf of everyone at Rainbow Trust we want to congratulate him on such an incredible achievement. Every pound raised really does count, particularly in these difficult times. All the money raised by Chris will help Rainbow Trust to fund vital support to families with a seriously ill child like Godfrey Haire and his son Henry.”