The day my life changed forever

The day my life changed forever 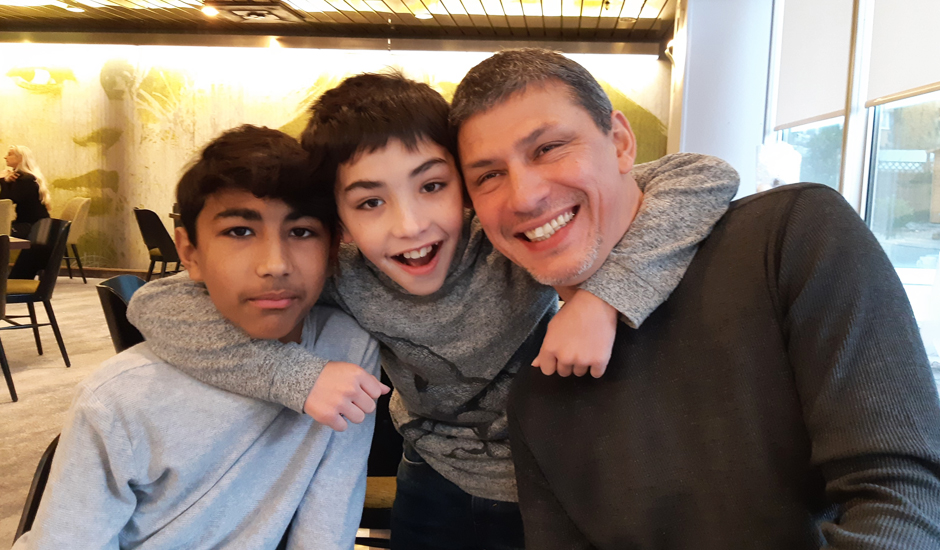 My family have been supported by Rainbow Trust since my son was diagnosed with Leukaemia and our lives changed forever.

We are an ordinary family, Mum, Dad and three sons, Marcel, Eddie and Arthur.

Until then, we had been fortunate with our children; they were all in good health and Arthur had never been to hospital. Little did we know, this would all change.

It was the start of the new school year; Marcel was due to sit his final A Level exam; Eddie had started Secondary school and Arthur was focused on getting 100% school attendance so he could become a Junior Governor.

Towards the end of August, we noticed that Arthur had bruising on his body following our summer holiday. We had allowed Eddie and Arthur to go to a Bouncy Castle, and Arthur came back covered in bruises and lots of exciting stories. We expected them to clear up, but they got worse.

Then, one morning, he woke up with his mouth covered in dried blood and swollen gums. We thought he hadn’t been brushing his teeth properly so, we went to the Dentist, hoping he would get a telling off and have them professionally cleaned. But the Dentist appeared concerned and suggested we see a Doctor.

The next day, he complained of chest pain. So, we headed off early to the Walk in Centre and were advised to go to Hospital for blood tests.

After Arthur was examined, we waited and eventually were moved to an ‘Isolation bay’. We were oblivious to what was going on around us, and Arthur was just pleased with his ‘special electric bed’.

In the meantime, I had to leave to collect Eddie from Secondary school and Suzanne asked one of the Nurses if there was any news.

She was a cheerful lady, but on her return, she asked when I would be coming back. When Suzanne said I’d pick them up when they we’re discharged, she turned to my wife and very seriously said, ‘you’re going to want him here, with you’.

This was the point we realised that Arthur was a very ill child. The next month is a complete blur.

As soon as I got back to the Hospital with Eddie in tow, Suzanne and I were taken to a room. Much of that conversation is hazy, but we were told that Arthur had leukaemia, his white blood cell count was high, and he was at risk of bleeding and infection, so needed immediate treatment.

Ordinary life disappeared in a flash. We were only able to plan for the next five minutes, the next step, the next procedure. We didn’t know it then, but our lives would now be a whirlwind of operations, blood transfusions and tests. Great Ormond Street Hospital became our home for a month, and when we could leave, we realised how vulnerable we had become.

We had no idea how we would manage everything, looking after our children and each other.

On discharge, Arthur still faced months of gruelling treatment. It was then we were referred to Rainbow Trust and introduced to Janet, who has been our Family Support Worker ever since. The rest, as they say, is history!

Janet has supported us through numerous appointments and many highs and lows. We could not imagine coping without her.

Her support has meant we could have time away from Arthur to discuss treatment with his Consultant or have time to reflect.

She understood our routine. Her support also meant that we were able to sit in the back of the car with him on the way to Hospital when he was worried or scared and post treatment when he felt sick. She also has a remarkable ability to find a parking space!

Despite the enormity of my son’s cancer diagnosis aged 8, this experience has changed us for the better. We have met some amazing people and made friends we would otherwise never have known. We’ve also been touched by sadness and lost some courageous children along the way, which has reinforced to us how lucky we are.