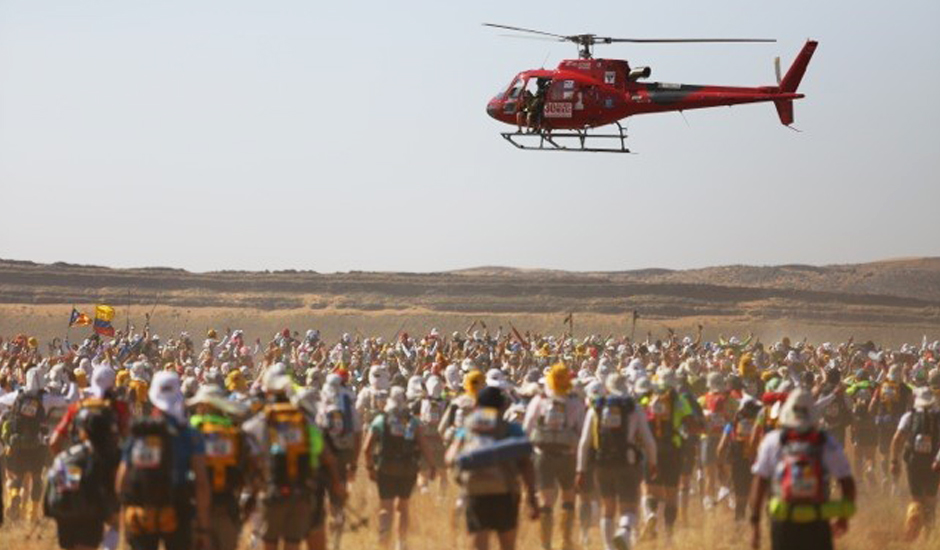 Richard, long time supporter and our Fundraiser of the Month, blogs about his experience taking on the Marathon de Sables - a footrace across the Sahara back in April this year and what got him over the finish line.

Emotionally and physically it truly is the “Highway to Hell”, a route once started you know you cannot leave unless it breaks you.

The excitement of the start seems a long time ago. Final words of encouragement from Patrick Bauer (who undertook the epic journey in 1985) from the roof of a landrover, AC/DC music blasting out, Highway to Hell of course, and helicopters circling overhead against a backdrop of the most desolate, beautiful landscape imaginable and 1350 runners head off on the first 36km stage. 10km in and disaster struck - a path down to a dried river bed collapsed under me and I cartwheeled down a ravine - they gave me six head stitches, and a 15 min time delay when I got to the next checkpoint. The rest of that leg was a battle against the heat and terrain, stumbling over the line some three hours later.

The next two days were similarly brutal, the terrain more hostile and heat more intense. The dropout rate picked up, the limping trail grew rapidly. Each night just when we needed sleep a sandstorm would blow through leaving a trail of chaos by first light. Each morning became a painful ritual: Cook, eat, repair foot damage, collect your daily water ratio, pack and drag your aching body to the start line. Just after dawn, The Berbers, waiting for no one, would dismantle your bivouac around you whether you were awake, dressed, ready or not, leaving myself and five tent mates limping around in varying states of disarray.

The terrain varied each day with mountains, salt flats, dunes and dried river beds to navigate -. 1000m climbs up rocky terrain with airless canyons where the temperature lept into the mid 40’s and, when you got to the top, a breathtaking view with a hot breeze before, seconds later, leaping onto the sand dune descent over an equally perilous distance the other side.

Already battered, blistered and, in my case, stitched. This year, as a 30th Marathon de Sables anniversary treat, the longest day was to be a record 92km. Starting at 8am, I wasn’t to finish until 1am the next morning: there were many low points as night fell on the longest day.

Already dark, having run for 12 hours, with your head torch now on you hit a sand dune that just climbs and climbs. You look up and all you can see is the green night sticks of other runners stretching upwards until you can see no further. With no other light save from an amazing starfield, you have no idea how far the climb stretches - I found out - over 2 hours later I hit the top.. And still had two further checkpoints to reach.

The only thing that kept me going during the deep lows on that pitch-black night was thinking back on the amazing support from so many friends and colleagues and, most importantly, the love and support of my family - and the unbroken desire not to fail anyone.

I eventually crossed that stage’s finish at 1am and as I stumbled back to my tent, realised I was one of the luckier ones. Not only were so many other tents still empty as their occupants continued to do battle somewhere out in the desert night, but many tents were actually completely missing, blown away by a brutal sandstorm that had swept through camp some two hours earlier - how totally crushing would it be to get back later than myself only to find no tent to collapse into?

“With that most powerful of fuel, I found I could dig even deeper than I ever thought possible and just kept putting one foot in front of the other.”

There was a real sense amongst all of our tent that with one final push on the last day, we had remained unbroken by all the Sahara could throw at us, we had patched our battered bodies and that emotionally and mentally we had plummeted to depths not thought possible. As you approach the final finish line, the enormity of all this swept in waves over all of us. It is a very emotional moment as Patrick, with a kiss on each cheek, puts the finisher’s medal around your neck - tears of total exhaustion from many. It’s only then that you understand his opening words:

The MdS is an individual journey of humility, solidarity, respect and humanity. It is one that you emerge far stronger from because of the support you have received from all around you and all family, friends and colleagues back home.

Looking around at the group of tired bodies cheering their remaining fellow runners over the finish you realise what a unique group we were: 53 nationalities were represented, 203 women took part with Elisabeth Barnes, women’s winner, 19 overall and one of the most gracious and humble competitors you could wish to meet, the 1st fully blind participant, David, competed in and completed the race together with many others with varying degrees of disability… and there at the finish line we all were lined up cheering each other home.. humility, solidarity, respect and humanity.