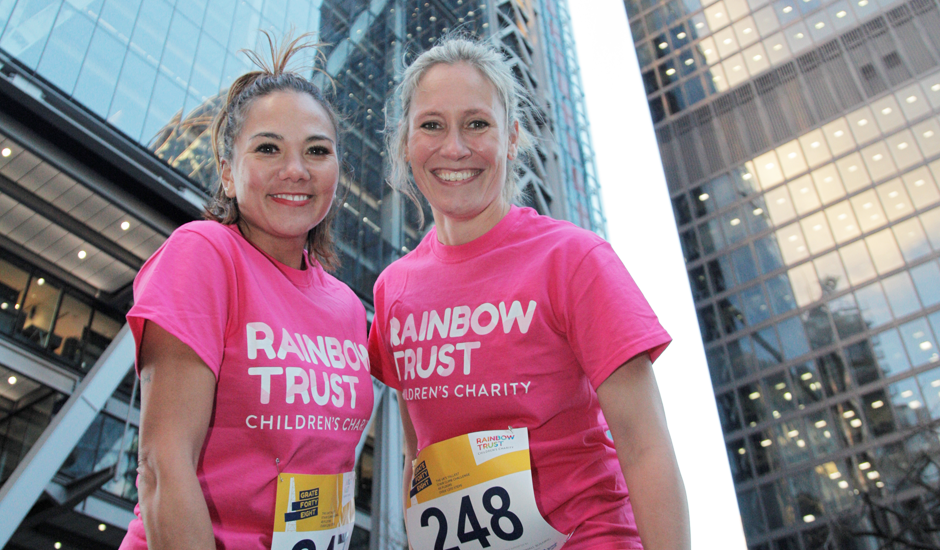 Hundreds of competitors, including BBC Newsreader Sophie Raworth, took part in the UK’s highest stair climb at the ‘Cheesegrater’ on Thursday (10 November) raising £75,000 for Rainbow Trust Children’s Charity, enough to support a family caring for a life threatened or terminally ill child for one year.

The Grate48 challenge at the 737ft high Leadenhall Building saw participants race up over 1,200 steps, across the building’s 48 floors finishing over 200 metres above street level.

The three competitors were part of an elite running team who mounted the steps first. They were joined by David Harris and Martin Pedersen, who flew in from Denmark specifically for the event.

Mark, from Liverpool, has won several UK competitions at buildings including The Gherkin, Beetham Tower (Manchester) and Spinnaker Tower (Portsmouth). On an international scale, he finished eighth at the Empire State Building Run Up where he was competing against the world’s best tower runners.

He said: “Grate48 was one of my toughest challenges yet, the highest stair climb I have ever taken on in the UK. I feel extremely proud to have won and to have had the chance to tackle one of the country’s most iconic buildings. The views were spectacular and I am thrilled that the event raised so much money for a cause as worthy as Rainbow Trust.”

After the race runners received a medal, a Grate48 branded t-shirt and enjoyed spectacular views across the Capital and a drinks reception. The challenge was arranged in partnership with Oxford Properties, the real estate arm of OMERS, who are the co-owners of The Leadenhall Building as well as having their European headquarters in the building.

The £75,000 proceeds will provide a massive boost to Rainbow Trust, which supports over 2,000 families caring for a child with a life threatening or terminal illness. It costs £42,300 for a Family Support Worker to support a family at home, in hospital and in the community for one year, helping in whatever way they can to make life a little easier.

Sophie Raworth and Susie Chan have competed against one another before and became friends on the running circuit.

Sophie said: “The atmosphere was incredible and I had so much fun taking part in Grate48 and raising money for a fantastic cause. It felt exhilarating reaching the top and I thoroughly enjoyed sharing the experience with Susie and the other competitors.”

Susie said: “This challenge was over in a flash compared with my usual long distance events but it was just as exciting and I loved every minute of it. I was extremely proud to be racing to the top for Rainbow Trust and being part of this wonderful fundraiser.”

“Our heartfelt thanks go out to all Grate48 competitors for being part of this unique opportunity to experience the city’s skyline from the top of one of London’s most iconic buildings. The £75,000 they have raised for Rainbow Trust will make a huge difference to families caring for a child with a life threatening or terminal illness. We are extremely grateful to The Leadenhall Building and OMERS for their support.”

Sally Saadeh, Director of Marketing and Communication at Oxford Properties said on behalf of the OMERS Leadership Team:

“We are proud to have Rainbow Trust as the OMERS corporate charity and were delighted to host the UK’s highest stair climb at The Leadenhall Building. It was a fantastic event and the £75,000 raised will help Rainbow Trust provide invaluable support to thousands of families. Well done to everyone who took part.”