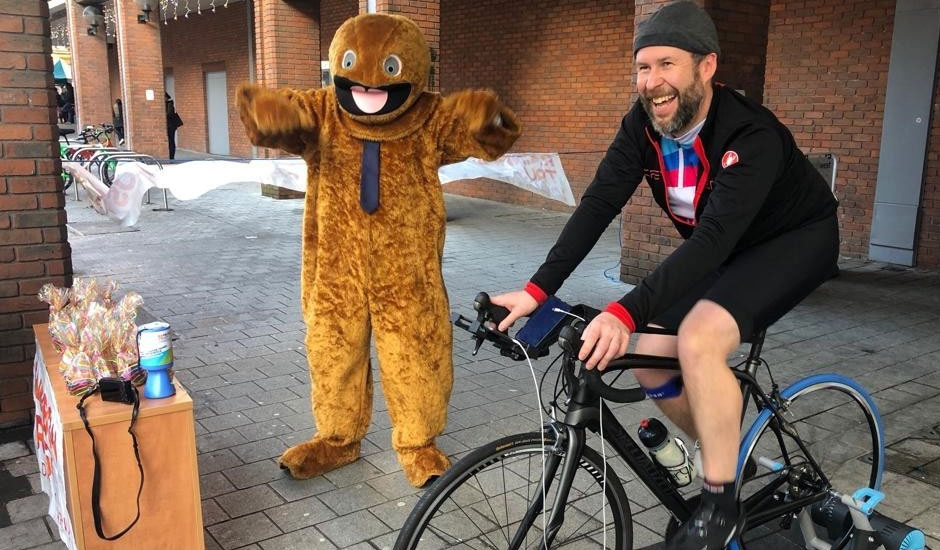 We think Godfrey Haire (from Redhill, Surrey) is pretty amazing.

Not only is he preparing to donate his kidney to his eight-year-old son Henry, he’s also taking on RideLondon as well as six other cycling-related challenges! All in aid of ‘Team Henry’, this challenge spans 12 months with the aim of raising a whopping £10,000 for Rainbow Trust Children’s Charity.

As a thank you to Rainbow Trust for the support they’ve received, Godfrey kicked off his year of sporting challenges with a bikeathon on Friday 30 November. Together with some of his colleagues from Cubitt and West, he was cheered on by family and passers-by. Godfrey commented:

“It was such a great day and we were truly amazed at the generosity of the Redhill Public for their many donations. Also, the number of people who came to cheer us on really helped. We loved the dressed-up Rainbow characters: George, Zippy and Bungle, who not only kept us amused with their dancing but also put many happy faces on the children.”

Godfrey has so far raised more than £4,000 of his target and there looks to be no stopping him! The main event, RideLondon will take place on 4 August and involves a brutal 100-mile race around London to Surrey. Godfrey is then set to challenge himself again and will cycle the virtual equivalent of the 4,828km distance across America and cycle up Everest four times. He’ll cycle up Sa Calobra in Mallorca and up Ventoux in the French Alps as well as completing the Hever Castle triathlon.

Rainbow Trust has eight care teams of Family Support Workers across nine locations in England, including Surrey helping families at home, in hospital and in the community, wherever they are needed. Family Support Worker Nicki has been supporting the Haires and has made a great difference to their lives. Godfrey said:

“Henry has severe kidney damage and is entirely fed through a tube in his stomach but thanks to the tremendous support provided by our Rainbow Trust Family Support Worker, Nicki, he is a very happy child.

Henry needs many syringes of medicines every day, he’s also catheterized every three hours and needs to be peg fed through a port on his stomach through the night. Nicki is there whenever we need her. She helps with the practical things like driving my wife Beccy and Henry’s brother, Thomas, to hospital for Henry’s check-ups and treatments, entertaining Thomas during the long waits for consultants and tests, as well as providing us with much needed emotional support.

She can’t cure Henry’s condition but she helps us cope day to day. Please sponsor us so that we can say thank you to this fantastic charity so they can help our family and many others like us.”

Oonagh Goodman, our Director of Fundraising and Marketing at Rainbow Trust:

“We are incredibly grateful that Godfrey and Cubitt and West are helping us. All the money raised from the event, and all of Godfrey’s challenges, will help Rainbow Trust to support families to make the most of the precious time they have together.”

You can support Team Henry by signing up to RideLondon with Rainbow Trust. Use code TEAMHENRY at checkout and save 50% on your registration fee.

If cycling isn’t your thing simply show your support for Godfrey’s challenge by donating to his fundraising page.