Father’s colleagues raise money in support of his daughter

Father’s colleagues raise money in support of his daughter 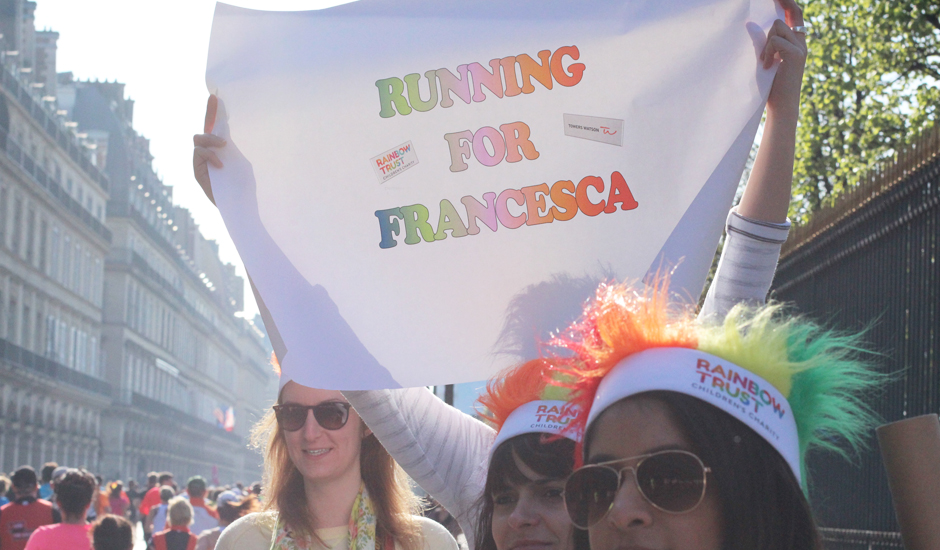 Five employees from Towers Watson, a global professional services company, took part in the 2015 Paris Marathon on Sunday 12 April in aid of Rainbow Trust. For this team of runners, the challenge meant more than running 26.2 miles, it was in support of their colleague Grant, whose family is supported by Rainbow Trust.

Francesca is almost five years old and lives in Surrey with Grant, her father, Liz, her mother and Imogen, her sister. In 2011, at just nine months old, Francesca was diagnosed with a rare form of cancer. She has had to fight through the side effects of multiple therapies, including a weakened immune system, damage to her hearing and reduced vision.

Rainbow Trust has helped the Dale family over the last four years.

“We are so lucky in the support we’ve received from the organisation,” Grant Dale

Compelled to show their support

When one of Grant’s colleagues approached him and asked how the team could best help Francesca, Grant and Liz knew immediately that Rainbow Trust was the organisation they wanted to benefit from the team’s fundraising efforts. The team says that running in support of Grant and Francesca was something they each felt compelled to do. They describe Grant as “one of life’s gentlemen” and “one of the nicest guys you’ll meet, a genuinely good person.”

David, one of the runners, said:

“You would never know that Grant’s family is going through such a difficult time. I thought, ‘how could I not do this?’”

Despite the fact David didn’t consider himself a runner of the marathon calibre, he and four other colleagues put their names forward to show their support. It wasn’t easy for David, Ollie, Antoine, Andy and Praveen, but they kept Grant and his family in the forefront of their minds when they tackled one of the biggest marathons in the world.

“There were times when it got really tough, but I thought about the bravery of all the families and children and it put things into perspective. Raising money on behalf of Francesca was a real honour, I hope we did the Dale family proud.” Andy

“Running a marathon was one of the biggest personal challenges I have set myself. The training was tough and the last 4 miles were gruelling, but the motivation that we were raising money for such an important charity that helps a family I know, most definitely carried me across the finish line. “ David

The team were joined in Paris by their very own cheering squad of Towers Watson colleagues.

“Doing any marathon is a great challenge and experience. Doing one with such a great group of people made it an enormous pleasure and a lot of fun. Special mention to our supporters who looked great in their headbands!” Ollie.

Grant is very grateful for the support the Towers Watson ‘family’ has given him and his family over the years. To date, for this challenge alone, through their online page and activities in the office, including a very successful raffle, the team has raised almost £4,000 for Rainbow Trust.

“There came a point where I genuinely considered giving up. And then I remembered why I was doing this in the first place. The pain didn’t go away, but giving up just wasn’t an option.” Praveen