Duo rally together in aid of Rainbow Trust Children’s Charity

Duo rally together in aid of Rainbow Trust Children’s Charity 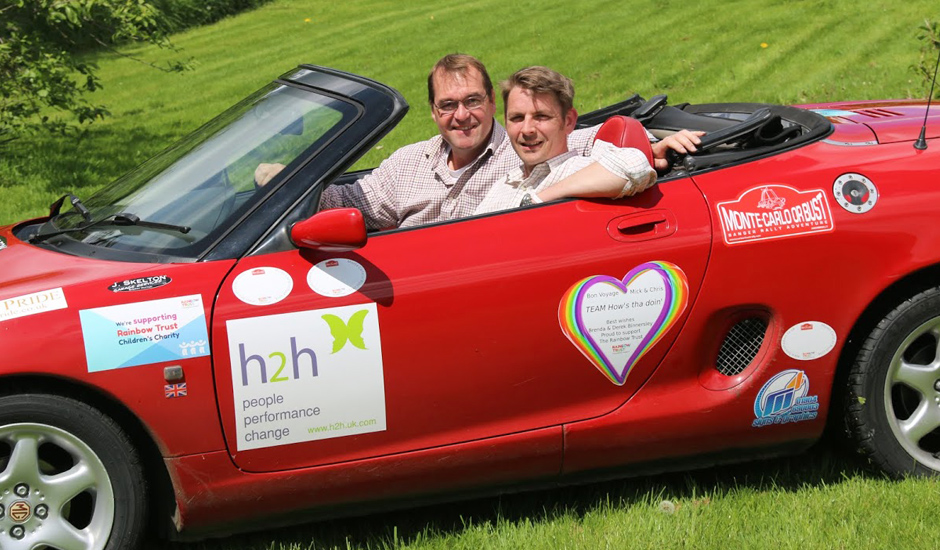 Michael Binnersley and Chris Richardson from Liling and Hovingham near York, will be going on a trip with a difference as they take on the Monte Carlo or Bust Rally on Thursday 4 June. The duo will be taking part in the ultimate European banger rally adventure in aid of Rainbow Trust Children’s Charity.

The pair will make their way from Belgium to Monte Carlo over three days, driving over 1,000 miles in a car they have had to buy for £300 or less. During the journey, Michael and Chris will also need to take part in daily challenges, on and off road while competing for prizes. In 2014, 150 cars completed the challenge, with over £100,000 being raised for UK charities.

Michael wanted to give something back to Rainbow Trust, after one of our care teams supported his son Daniel 19 years ago when he fell ill and sadly died. Over the years, the Binnersley family and friends have taken part in various fundraising activities in support of Rainbow Trust, but this is the first time they have done anything like the rally adventure.

“We’ve both always had an interest in cars and driving so we wanted to do something that was a real adventure and the Monte Carlo or Bust rally fit the bill. We’ll no doubt experience difficulties along the way, but it is all for a cause close to my heart and that certainly makes it worthwhile.” Michael

“It’ll definitely be a lot of fun but we’re also aware of the challenges it faces. We’ll be bringing our own tools - if your car breaks down then it’s left to you to fix it. It’s taken a lot of preparation to source the car and get it road worthy so I really hope it survives the journey”.

Michael and Chris have also created a blog so people can follow the progress and work that has gone into getting the car up and running. They will be posting updates of their journey during the three day rally.

The two friends are aiming to raise £3,500 which would pay all the costs associated with a Rainbow Trust Family Support Worker’s car for six months. They have received donations and sponsorship from a number of businesses but they are also hoping that locals will rally round and get behind the challenge.

“This is a really exciting challenge and we are proud of both Michael and Chris’ hard work and dedication. The money that is raised from events like the Monte Carlo or Bust Race is essential in helping us continue the vital support we provide wherever and whenever families need it.”