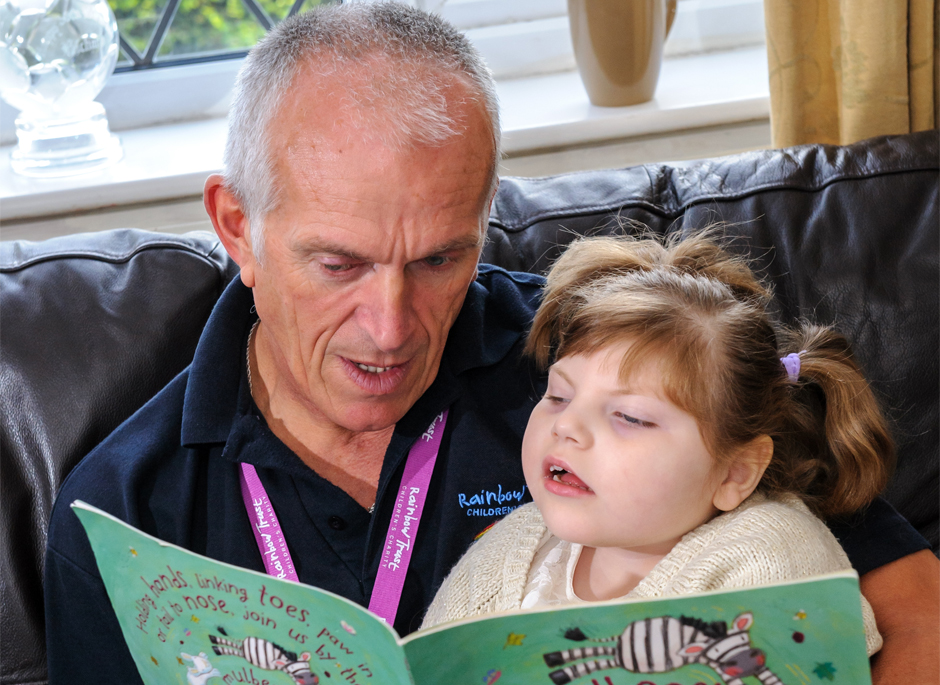 When Tilly-May Sommerville from Bristol was born in November 2006, her parents, Jenny and Richard were overjoyed at her arrival, but at the same time were heartbroken. This is because Tilly-May was born with part of her brain missing. That wasn’t the end of Tilly-May’s condition either as she was also born blind with Cerebral Palsy. Doctors explained to the family that they didn’t expect her to live past two. However, when she went past that, the family were told that children with similar conditions who surpass two years don’t live beyond seven. Tilly-May is now six and turns seven in November.

This week Rainbow Trust Children’s Charity is using the extra hour given to us when the clocks go back on October 26th to remind people of the importance of an hour of family life and encourage others to use that time wisely. Tilly-May’s parents talk about how precious time really is to their family.

Tilly-May requires 24/7 care, which can put a strain on the family as she also has an older sister, Emily, an older brother, Ben, and a younger brother, Dylan. “It’s especially hard when I am in hospital with her as sometimes I can be in there for two weeks at a time, living there day and night as there is no way I will ever leave her when she’s in hospital.” Jenny explains.

Rainbow Trust was recommended to Jenny when Tilly-May was four years old. She met Bryan, a Family Support Worker from the charity’s Swindon team. Jenny remembers: “When Bryan first came into the house, he knelt down next to Tilly-May and just let her stroke his face. As she is blind, this is her way of feeling safe with people and knowing they are friendly, and Bryan just did it without batting an eyelid. They hit it off instantly and after a few months Tilly-May had a fantastic bond with Bryan.”

Jenny describes how the bond between Bryan and Tilly-May alleviated so many stresses for her, “he would always just walk straight over to Tilly-May, pick her up or spend time with her, which meant I could do other things. I now had someone I could leave with her in hospital, which allowed me to pop home for a few hours and spend some much needed time with Dylan.”

With Bryan’s support, Jenny is able to give more time to her other children, which is hugely significant for the Somerville family. “It’s important for us to give quality time, especially to Dylan so he gets that one-to-one attention. It means we can take him out and spend time with just him. And, although Emily and Ben are older and understand the situation we are in more, the same goes for them, they still need quality time with their parents. I used to struggle to trust leaving Tilly-May with anyone, but it’s good for her to have time with other people, and although it did take me a while to let other people look after her, with Bryan I just trust him completely. There are not many others I do [trust] to have her.”

As Tilly-May approaches her seventh birthday, Jenny and her family want to make the most of every day they have with her. “Rainbow Trust do an amazing job and we couldn’t live without them. And, when that tough time comes, it’s nice knowing Bryan will still be here with us to get us through it.”

Rainbow Trust support families for as long as they need them.

The charity is encouraging people to take part by using that extra hour gained to make a difference by baking various tasty and creative treats for a tea time from 20-26 October in order to help raise vital funds for those in need. For further details on how to register for ‘The Big Hour Tea Time’, visit www.thebighour.org.uk