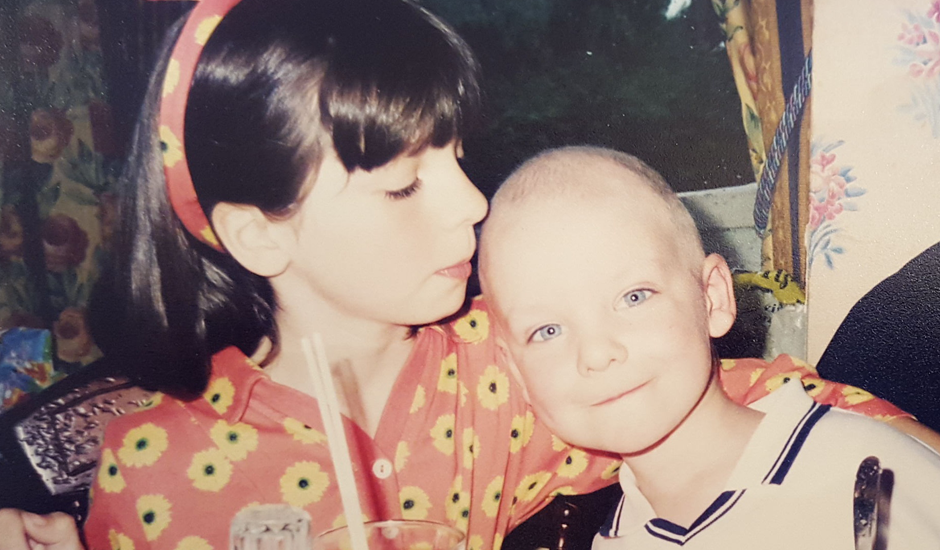 A woman whose family was ‘thrown into turmoil’ when her brother was diagnosed with leukaemia said Rainbow Trust Children’s Charity ‘saved them’ and has chosen to speak out to publicise Volunteers Week running from 1 – 12 June.

Lucinda Harris, 27, from Godalming, was so impressed with the charity she became a Volunteer Ambassador for Rainbow Trust in 2011 and now tirelessly raises awareness by talking about her experiences at various events and fundraisers.

Her brother Michael was diagnosed with Acute Lymphoblastic Leukaemia in 1996 when he was four years old. He has been in remission since 2003, and will celebrate his 24th birthday in June.

The Harris family was referred to Rainbow Trust when Lucinda was seven and she remembers how the charity pulled them through. Then living in Hampshire, they were assigned to Melanie, a Family Support Worker from the Southampton care team.

“Rainbow Trust did absolutely everything,” Lucinda said. “Melanie came in and saved us all. Michael was so ill, Mum and Dad had to be with him all the time. She became my best friend, she was really fun. It was really nice to be able to have someone to talk to and she told a seven-year-old about Michael’s illness in a way that did not scare me. She taught me about bad blood cells and used cartoons to put everything into context.”

Melanie picked up Lucinda from school, which helped them financially because her father could continue working and visit Michael in hospital with her mother. She also helped with home chores and became a family friend, someone for all of them to talk to.

“I was really scared,” Lucinda said. “I was fretting and worrying about whether my brother was going to die when I should have been listening to the Spice Girls.”

Lucinda has represented Rainbow Trust at golf and rotary clubs as well as the charity’s flagship event, Trust in Fashion.

“I love telling my story,” She said. “In the beginning I could not talk about it but I’m enjoying the Volunteer Ambassador role so much now. Raising awareness is my calling. This means more to me than anything. It is important to make people think about how lucky they are. Rainbow Trust is such a great charity because it is really important to make life comfortable for people suffering with an abhorrent illness.”

Crucially, Rainbow Trust brought some normality back into their lives.

“It has not affected us as much as it would have done without Rainbow Trust.”

“Volunteer Ambassadors enable us to reach out to more communities and raise awareness of our work. Lucinda’s support as a Volunteer Ambassador for Rainbow Trust is absolutely incredible. We are very grateful to Lucinda for her energy and enthusiasm and for all the time she donates to us.”

Rainbow Trust Children’s Charity relies on the support of its volunteers to operate. They fulfil vital tasks including office support, helping at events, fundraising, providing transport and supporting the care teams. In 2014/15, the charity’s 350 volunteers donated 34,687 hours of support. Using the living wage, this equates to an incredible £272,293 of donated time.

Volunteers’ Week is a national campaign running from 1-12 June, which promotes volunteers’ contributions across the UK. If anyone is interested in volunteering with Rainbow Trust, take a look at our volunteer opportunities or call Andrea Kelley, Volunteer Manager on 01372 220043.