This Christmas, meet Jenson and his family

This Christmas, meet Jenson and his family 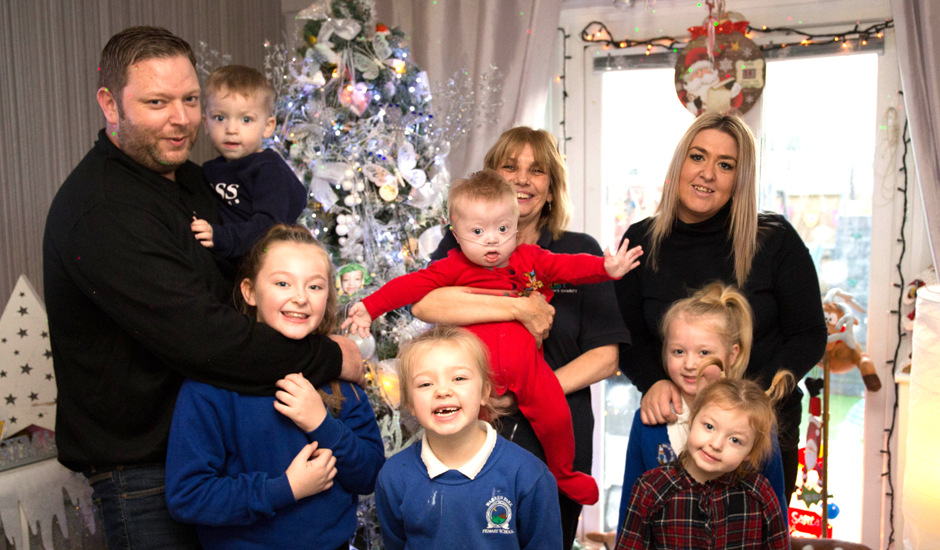 Clare and Steve have six beautiful children and like most parents at Christmas, want the day to be as special and magical as possible for them. So, when Jenson, their youngest, was rushed to hospital on Christmas eve, their plans for a magical family Christmas fell by the wayside. This is their story…

Jenson is the youngest of six children. He has Down’s syndrome, heart and lung problems and needs oxygen 24/7. He also has feeding difficulties so needs a specialist feeding tube.

In the run-up to Christmas day he was in and out of hospital. He had been unwell, he had an awful cough, but doctors kept telling us that it was nothing serious, that it was just a virus and to give him paracetamol.

On Christmas Eve, when we were wrapping the last few presents, everything changed. Jenson started struggling and fighting for breath. Frightened and panicked we called an ambulance. He was diagnosed with pneumonia and admitted to hospital.

When the children woke up, they didn’t know that I wasn’t there or that their baby brother was in the hospital. I was so upset - they’ve missed out on so much with Jenson being so ill and the thought of not being with them for Christmas morning was just another time I was letting them down. It was awful. A few days before, my three-year-old had asked if the hospital was my other home as I was there so often with Jenson.

Steve ran around on Christmas morning videoing them waking up and opening presents so that I could be a part of it later, but it just wasn’t the same.

Jenson was finally discharged late on Christmas day, so my dad fetched us from the hospital and brought us home. I didn’t want the children at the hospital to see Jenson hooked up to monitors and tubes on Christmas day but when we got home, they’d opened up all their presents and we’d missed it all.

Steve and I tried to keep what was left of the day as normal as possible, so we still had Christmas dinner but it was much smaller than it should have been. Looking back now, it feels like Christmas was ages ago, as it just didn’t feel like Christmas. We always have Christmas at home with 22 of us but that year we couldn’t.

It was awful for all of us. Paris, our eight-year-old, wrote to Santa this year, not asking for presents but that her little brother would be well and home for Christmas. The older children remember how horrible it was not being together. This year, we plan to make this Christmas extra special.

Our health visitor recommended Rainbow Trust Children’s Charity to us as they could see how we were struggling with Jenson’s appointments and being there for our other children. Dawn, from the Southampton team started supporting us in February 2018 - we call her Mary Poppins!

She’s done loads for us. She’s looked after the other children for me so I can do the shopping without having to drag all six children out. They love her - if we tell them that Dawn is coming, they get so excited. Paisley is three years old and doctors think she could be on the autistic spectrum. She doesn’t take to everyone, but she has with Dawn who is amazing with her. Because Dawn has worked with so many children, she has been able to help me with Paisley.

Dawn helps with getting the children to school and has even been at our house at 7am to get them all in on time. We wouldn’t want to be without her now. When I need her, Dawn is always there for us. She’s even helped us to fill in forms and pointed us in the right direction for help we are entitled to.

Dawn is there for us when we need her, I would and have recommended her to other families – Rainbow Trust and Dawn’s support is such a blessing, we wouldn’t want to be without her now.

When a child is living with a serious illness, time becomes more precious than any of us can imagine. We give every family living this fear a specialist Family Support Worker to help them through. Not a website or a helpline. A real person who’s there for whatever they need - however big or small - for as long as they need.

Right now, we have 23 life-threatened or seriously ill children and their families on waiting lists and going through this alone. Can you help us raise £40,940 so that we can support them this Christmas? Please donate today.