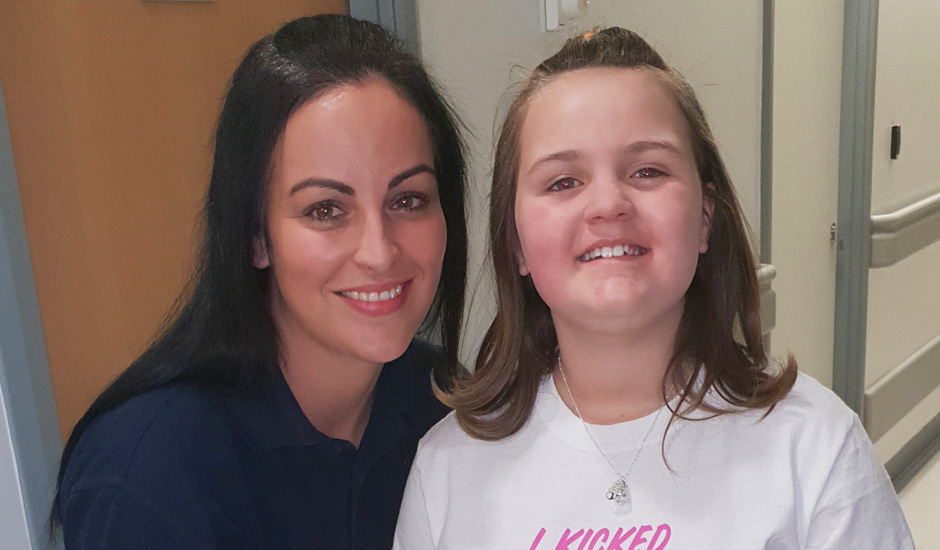 The mother of nine-year-old Sophie Laidler from Durham who celebrated the end of two years of gruelling chemotherapy at the end of January has spoken of her relief that Sophie was able to ring the ‘end of treatment bell’ after she experienced last-minute medical complications.

Sophie and her family have been supported by Rainbow Trust Children’s Charity since her diagnosis with leukaemia in October 2016.

Sophie had been due to ring the bell at the Royal Victoria Infirmary in Newcastle last Tuesday (January 29) but it was postponed for two days after she became unwell while she was asleep in theatre receiving her last round of chemotherapy. Once back on the ward Sophie spiked a temperature so doctors decided to remove the central line in her chest, which is used to administer chemotherapy, in case that was making her poorly.

Sophie’s family had been waiting with Rainbow Trust Family Support Worker Sabrina for her to come out of theatre after receiving her last round of chemotherapy when they realised something was wrong.

“We had been waiting for over an hour which was unusual and we began to panic something had gone wrong,” Sophie’s mother Nicola said.

“It was the most horrendous feeling ever when the nurse came and told us there had been complications and took me, her dad Paul and step mum Vicky to the recovery room to see her. Sophie was very frightened too.”

Fortunately, after receiving antibiotics Sophie recovered well and rang the ‘end of treatment bell’ twice at around 6pm both in the oncology day unit and the oncology inpatient ward.

She was joined by parents Nicola and Paul, Step mum Vicky and siblings Chloe, 10, Heidi, eight, Harrison, four and Lucy, aged one, along with Sophie’s aunt, uncle, grandmother and several cousins and members of Rainbow Trust’s North East Care Team.

The celebrations continued with a party at Shotton Hall, a grade two 18th century house in Peterlee last Saturday.

Nicola, Sophie’s mum said: “Sophie had been due to ring the bell on Tuesday because she usually had her appointments on Tuesdays, a ‘Tuesday girl’, but doctors felt it would be fitting for her to switch days. In the end it happened on Thursday but we were just so relieved she was able to ring the bell.

“The amazing doctors very quickly got on top of it all with fluids and medication and did what was needed and by the night time thankfully she was recovering well and was much better than she had been.

“Sophie was so excited, as we were. We were delighted to celebrate Sophie’s end of treatment. We have come a long way since her initial diagnosis over two years ago, and we were particularly pleased to be able to throw a party not only to celebrate Sophie’s health, but also to thank Rainbow Trust, our fabulous Family Support Worker Sabrina and other members of the North East Care Team who have made such a difference to us throughout Sophie’s treatment.”

The Laidler’s story was very different just two years ago as Sophie nearly died after first being diagnosed with leukaemia, and it was during these darkest hours in the hospital parents’ room that Nicola met Rainbow Trust Family Support Worker Sabrina from the North East care team.

Nicola said: “While Sophie was in hospital, Sabrina would take her brothers and sisters to and from school, have fun with them and take them out for the day. Without her there would have been no one around who cared about them or who could spend time with them while we stayed with Sophie. I’m so grateful to her for taking on board what they were going through. Sabrina and Rainbow Trust have made a real difference to our lives.”

The Laidlers have lots of exciting things planned for 2019, including a trip to Cyprus, which will be the girls’ first time abroad, and Sophie is off on a school residential to the lake District in May.

“This year is looking bright for Sophie,” Nicola said.

“She’s really looking forward to having some relaxing time in the Cyprus sun with her dad, step mum and siblings. And with an offer to stay in a friend’s villa in Spain later in the year too, we all have plenty to look forward to. Doctors will still need to monitor Sophie for a long time but in terms of treatment, that finished on 29 January.”