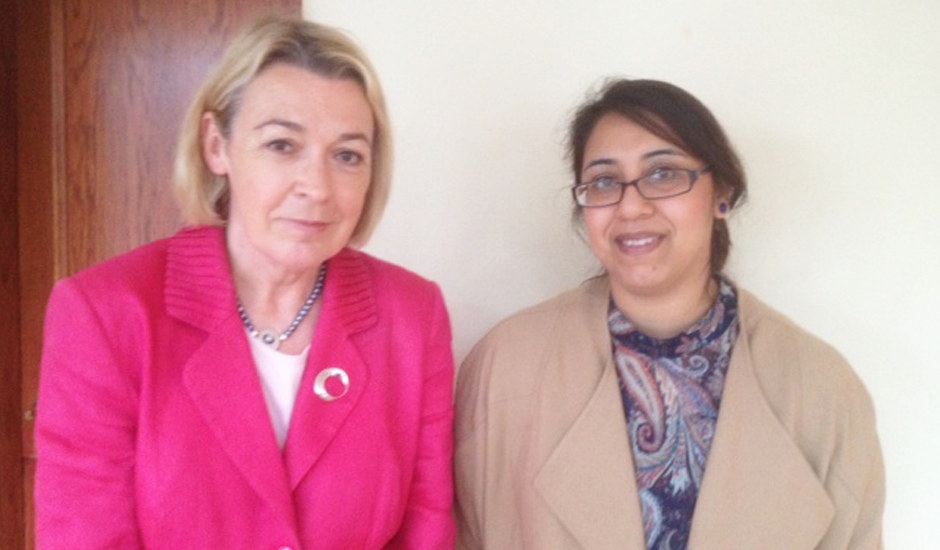 The MP for Worsley and Eccles South visited a mother of twins who is supported by Rainbow Trust Children’s Charity.

Barbara Keeley, former Labour Shadow Minister for Care, met Naheed Umarji in Worsley on 15 July and heard how Rainbow Trust had put back a ‘little bit of normality’ into Naheed’s life.

The MP has previously highlighted in parliament the ‘essential role’ provided by Rainbow Trust’s Family Support Workers, and she called on the government to ensure that every child with a life threatening illness has access to support.

Naheed told the MP how hard life can be with a seriously ill child. Her ‘miracle’ daughter, Samera and her twin sister Humaira are four years old, born at 28 weeks after five attempts of IVF.

Samera was born with a complex condition and chronic lung disease which causes breathing difficulties, resulting in numerous hospital stays. This year, Samera has spent four weeks in intensive care and three out of seven months in hospital.

Naheed struggled to look after the twins at first and told Mrs Keeley about the logistical and emotional challenges of having a seriously ill child.

“The parents have to fight for everything. If you were a quite dormouse parent you’d get nothing. It took us two years to get a walking frame and more than that to get practical help. Samera is a trooper, a bit of a miracle child, she’s a real fighter. And while she is still fighting I will be fighting too, for as long as she does.”

Naheed copes more easily since her dedicated Rainbow Trust Family Support Worker became involved. Naheed’s family was referred to Rainbow Trust and was introduced to their Family Support Worker Sarah in January 2013. Sarah has provided much emotional support to Naheed, enabling her and her husband Sajid to have vital respite each week. Sarah helps with Humaira and takes her out to have some fun.

“A bit of normality, that’s what Rainbow Trust brought into my house. Sarah was the very first person who took my children anywhere. I was nervous the first couple of times but she would give me a full account of what they had done. Rainbow Trust are like a Godsend. They have done a lot of weightlifting.”

Rainbow Trust supports 125 families across Greater Manchester, including nine in Salford, providing emotional and practical support, sibling support and bereavement care to families. Each family has a Family Support Worker to help at home, in the community or in hospital, wherever they are needed.

“It was good to meet Naheed and to hear how Rainbow Trust is supporting her and her family. Across Salford, the charity is providing great care and support for nine families whose children have a life threatening illness. During our meeting Naheed told me how the practical and emotional support given by Rainbow Trust makes a real difference to her life. With the help of her Family Support Worker, Sarah, she gets support to help with the care of four-year old Samera.”

“We are extremely grateful to Barbara Keeley MP for meeting a family supported by Rainbow Trust and for highlighting the importance of our work during a recent parliamentary debate. The Department of Health is consulting on a new Carers’ Strategy and Rainbow Trust will be making a submission to highlight the needs of families like the Umarjis.”