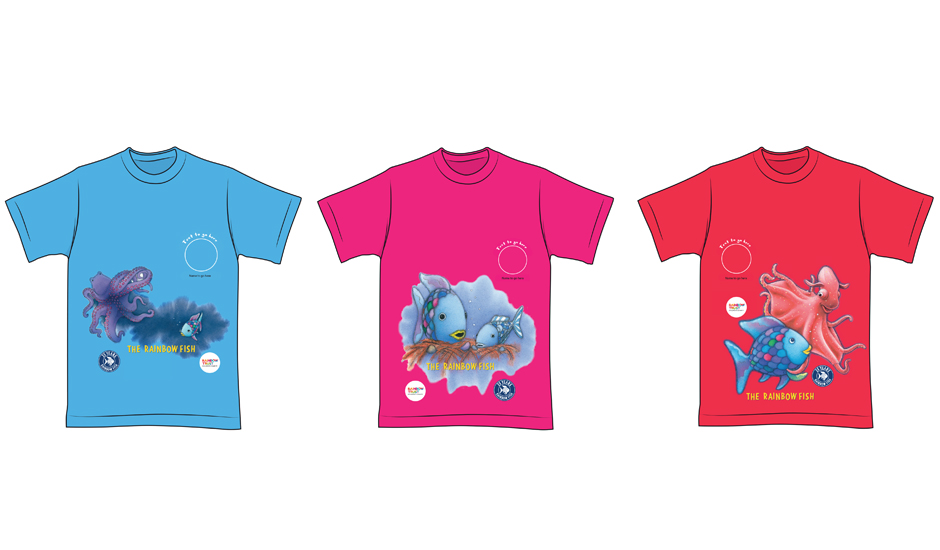 Louis Kennedy and NorthSouth Books have announced that Rainbow Fish is celebrating its 25th Anniversary with a partnership with Rainbow Trust Children’s Charity, supporting families with a life threatened or terminally ill child.

First published in 1992, The Rainbow Fish titles, written by Marcus P Fisher, have sold over 30 million copies. The eighth book in the series “You Can’t Win Them All, Rainbow Fish” has just been published in the UK in hardback. To celebrate this milestone year, exclusive Rainbow Fish personalised T-Shirts are now available on Digital Giving’s T-Shirt Booth platform, with each one sold generating £2 for Rainbow Trust.

The Rainbow Fish books offer lessons about sharing, friendship, accepting differences, love and facing your fears. These are issues that all children face so they can identify with the comforting characters. The many sea creatures in the books are colourful, full of personality, and beautiful. The images are eye-catching and engaging, ideal for translating into exclusive T-Shirt designs.

Rob Mejia, of RJM Licensing said, “We were looking for a great opportunity to really connect with our fans in the UK linked to the new book and 25th Anniversary. When we were approached by Tracey with the concept of a charity partnership with Rainbow Trust we knew the fit was perfect.”

Whilst launching the partnership with T-Shirt Booth, Louis Kennedy is actively developing other brand and retail partnership concepts to take to the market, following on from the hugely successful campaigns Rainbow Fish has undertaken in the USA.

Emma Haines, Director of Marketing and Fundraising at Rainbow Trust Children’s Charity said: “We are absolutely delighted to be partnering with Rainbow Fish and Louis Kennedy. The partnership will be a wonderful and engaging opportunity for Rainbow Trust to reach a new audience, enabling us to support more families who have a child with a life threatening or terminal illness.”

Children love the creativity of T-Shirt Booth; being able to select a design, choose one of 10 background colours, add a photo and name or other 12 character message then waiting with excitement for the T-Shirt to be delivered. Priced at £9.99 / $14.89 / 13.90 Euros + P&P the T-Shirts can be delivered worldwide and for every one purchased £2 goes directly to Rainbow Trust.