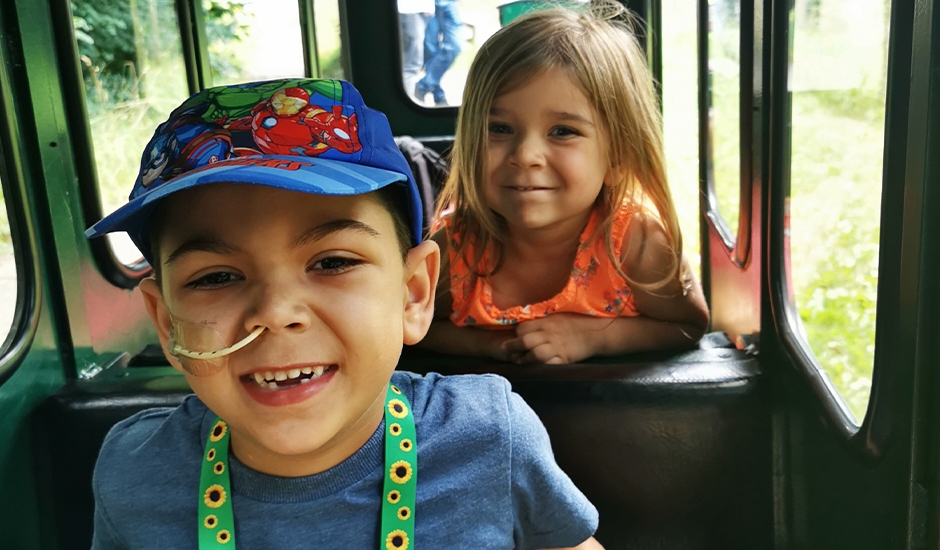 Mihaela, whose son has such a rare condition only ten people worldwide are known to have it, is backing new survey results from Rainbow Trust illustrating how parents with a seriously ill child are feeling 18 months after the pandemic first hit.

This family is one of many supported by Rainbow Trust who took part in the survey in August.* This is the fourth survey we have conducted since the start of the pandemic. In the latest results, 62% of respondents said that their mental health was either worse or much worse than before the pandemic.

Families also indicated how life has changed for them as a result of the pandemic. Top responses showed that families caring for a life-threatened child now feel more isolated (52%), more fearful (51%) and more exhausted (40%) due to the impact of the pandemic.

62% of parents also stated their greatest concern is their seriously ill child contracting COVID-19 and 47% of respondents said their financial situation has been negatively impacted.

Mihaela's son William was a healthy, energetic five-year-old boy until he suddenly developed twitching in his right leg and lost the ability to walk on Thursday 21 May 2020, as the pandemic gripped the UK. William was rushed to hospital to see if his spine was damaged.

He was referred to the John Radcliffe Hospital for more tests but rapidly deteriorated over the weekend, with all his limbs and speech affected before developing status epilepticus, a constant state of seizures, and was placed into a medically induced coma.

While in the coma, a DNA test discovered William had a very rare non-hereditary form of Mitochondrial disease called DNM1L. Only ten people in the world are known to have the same condition and they all present different symptoms. Doctors gave William a 20% chance of survival.

They told Mihaela that if William’s seizures could not be controlled it would cause him brain damage. They feared that if they could not stop the seizures, they would need to turn the machine off which was keeping him alive as it would be in William’s best interests.

“We couldn’t accept that he would die. We prayed and prayed and slowly we saw his temperature come down. On 5 June William opened his eyes – only for a short time but it was a sign that he was gradually getting better.

“The next two months were really awful with William needing regular incubation to help him breathe. He lost so much weight and had to have intensive physiotherapy twice a day. The pandemic made it all much harder, he was scared of all the medical staff in their PPE equipment, and I had to cope with it all on my own while my husband looked after our two-year-old daughter Sofia at home.”

Gradually William became stronger and on 2 September 2020 he finally made it home.

“It has been hard since we came home as he has no immunity and doctors do not know what William’s life expectancy will be as every type of mitochondrial disease is so different. We have non-stop appointments and in March he was diagnosed with a severe heart condition which means he also needs permanent oxygen overnight.

“Our Rainbow Trust Family Support Worker, Ellen, started supporting us in December and she is amazing. Aside from William’s medical team, Ellen is the only support we have and the only person we let into the house to give me a break from looking after William and Sofia.

“She provides fun for the children – she plays with William and Sofia and she always has games and activities for them. In the summer she even brought water balloons for the children to enjoy in the garden. She plays the children’s favourite tunes on the piano, and she has helped William with his schoolwork to give him a sense of normality when he has missed so much school.

“When William was rushed to hospital recently, Ellen looked after Sofia all day so that I could be with him. The children love her, and they count down the hours when she is coming. It is lovely for Sofia to have some fun and attention from Ellen too as it is so hard for her. She said to me one day, “Mummy, when will we be a normal family again?”

“Rainbow Trust’s support gives me a break. I can be creative and craft knowing that the children are safe and cared for in the next room. Sometimes we go to the park where Ellen can help me put William on the swing as it is not possible on my own.

“We try to make every day special now because we don’t know what is ahead. I find it hard to look at pictures from the past – I can’t look back as I can’t believe what has happened to us, to our little boy."

Rainbow Trust’s survey results are a clear indication of how hard life has been and continues to be for families like the Howards. The pandemic has made an unbearable situation even harder and Rainbow Trust hopes to give a platform to these families through its survey results so that their experiences can be heard.

“Our latest survey is another clear illustration of just how much harder life has become for these families due to the pandemic. The families we support are telling us that they are feeling more fearful and isolated than ever before. They are exhausted and their mental health is worse. These families need to be heard so that they know they are not alone in trying to cope with their current reality, navigating the frightening world as we unfurl from the pandemic.”

* Results from Rainbow Trust’s survey to families in August 2021 with 63 parents responding.