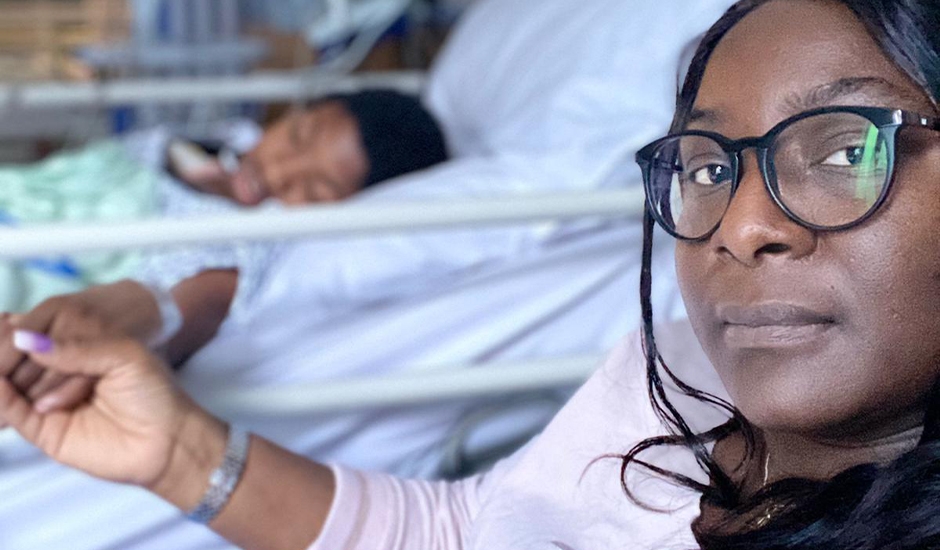 A Mum, whose daughter was on life support in April following a bone marrow transplant, is backing new survey results from Rainbow Trust illustrating how hard parents with a seriously ill child are finding life 18 months after the pandemic first hit.

Bukie's family are one of the families supported by us who took part in the survey in August.* This is the fourth survey we have conducted since the start of the pandemic. In the latest results, 62% of respondents said that their mental health was either worse or much worse than before the pandemic.

Top responses showed that families caring for a life-threatened child now feel more isolated (52%), more fearful (51%) and more exhausted (40%) due to the impact of the pandemic. 62% of parents also stated their greatest concern is their seriously ill child contracting COVID-19 and 47% of respondents said their financial situation has been negatively impacted.

Mother of four, Bukie, has two daughters both with sickle cell anaemia and her eldest daughter, Vanessa, 17, has the condition so severely that in February this year she required a bone marrow transplant, with her seven-year-old brother as her bone marrow donor.

Due to complications during Vanessa’s recovery in hospital, she suffered severe strokes and was rushed into ICU and placed on life support to protect her brain function.

“During the pandemic it was incredibly hard. As a family we have been so scared of covid coming into our home because it will kill our girls. Living in such fear was something we’d never experienced. My husband had to leave his job and I had to change my own work to online so that I could do it by Vanessa’s bedside when she was well enough.

“I entered the hospital with Vanessa for her transplant on 25 February and I was there with her by her side until 17 May. In the transplant unit we were not allowed to see anyone except for my husband who had to drive 20 mins every day to the hospital bring me food. For the first four weeks after her transplant I never left the room 24/7. I was unable to see my other children and it was so hard to show them any priority when I was living next to Vanessa and sleeping on a folding camp bed. I felt so isolated.”

“Vanessa’s blood pressure was very high and doctors rushed her to ICU. No one was expecting it and suddenly she was in a coma on life support. Doctors told me that they were trying to save Vanessa’s brain and I was able to call my husband and my sister to be with me. It was terrifying. For four days she was in the coma and on 13 April she finally opened her eyes. Three days later I was back on the transplant unit with her in strict isolation for another month before finally bringing her home.”

“I’ve heard people say that covid brought people together, but not for us. Before Vanessa’s transplant we were locked in a house looking out at the world going past us. We couldn’t go to the park or out with friends.

“Unlike her siblings, Vanessa still can’t go back to school and she has not seen any of her friends since last year. It's been over 20 months she last saw anyone her own age. Now the world is dancing, drinking and having fun, but we can’t.”

Bukie and her family have been supported by Rainbow Trust Children’s Charity. Their Family Support Worker Sabrina has been visiting them regularly to support Vanessa and the whole family. She is the only person outside their family whom they allow into their home.

“For us, our Family Support Worker Sabrina has been lifesaving, empowering and our light at the end of a tunnel. Recently she took all the children out to the park and gave me precious time to myself – it was the first time I had been on my own for 18 months.

“Sabrina is the only visitor we let into our home and watching her with Vanessa and my other children is beautiful. She also listens to me and hears me - it is amazing to have someone to talk to.

“For many minority families like mine accepting charity help is hard, especially during a pandemic and many are struggling. So many people say they are going to help families like mine but they don’t. To actually have someone helping us with no agenda and no judgement at such a difficult time has really been life changing.”

You can help us reach more families that need our support by donating today.