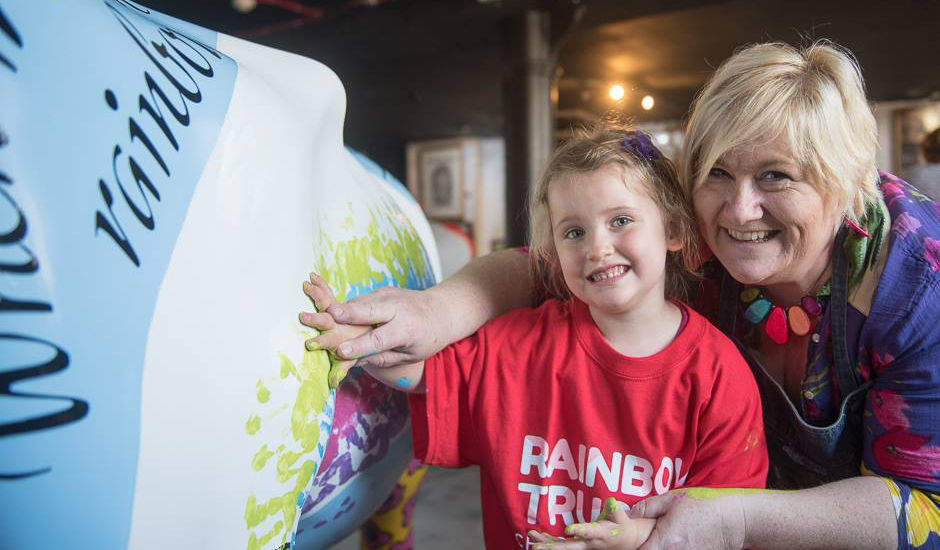 ​A Bournemouth family bought a life-size colourful cow hand-painted by their daughter and other children supported by Rainbow Trust Children’s Charity to thank them for supporting them with their son who has a rare terminal genetic disease causing severe and progressive physical and mental disability.

Hannah and Larry Watts bid £2,000 for ‘Mootilda’ to thank Rainbow Trust, which has been supporting them for a year and a half after their nine-year-old son Sam was diagnosed with Sanfilippo Syndrome when he was four and a half.

Sam’s sister Georgia, who will be five on 22 December, painted multi-coloured hand prints on one side of the cow at the Weymouth Art Asylum in May with another young sister whose family is supported by Rainbow Trust. The hand prints represent the charity’s support of children and families and the other side depicts the elements making up a rainbow.

The Watts are thrilled to have Mootilda in time for Christmas and are even considering decorating her with fairy lights. She is currently grazing in their garden.

Hannah Watts said: “It’s an opportunity to own something unique and we wanted to give something back to Rainbow Trust. Georgia is so excited Mootilda is here. She adored that day she spent painting her and still talks about it now. My son Sam has gone to look at Mootilda and once it’s positioned in its right place I’m sure he’ll say hello. She’s cheering up the garden. It’s very bright and sensory so I’m sure he’ll stroke it.”

Mootilda was designed by Weymouth artist Vikki Gibson for the Surrey Hills CowParade, the world’s largest public art event which saw more than 60 cows placed in popular landmarks across Surrey during the summer. The cows were auctioned in October after which Mootilda’s sponsors, commercial aerospace firm GA Telesis UK Ltd, based in Leatherhead Surrey, sold her to the Watts family.

Rainbow Trust’s Family Support Worker Claire has been providing emotional and practical support to the whole family for a year and a half. She picks up Georgia from school and takes her on fun excursions to the beach or soft play.

“They have a really good relationship,” Hannah said. “Claire takes me for a coffee if I’m feeling a bit down and looks after Sam. She is part of the family. Rainbow Trust supports the whole family so they give something that no one else can offer. Rainbow Trust gives us the help we did not know we needed. It helps us enormously and I cannot speak highly enough of them.”

Artist Vikki Gibson said: “I am thrilled that Mootilda has found a home in Dorset, as she was created in Weymouth. It’s lovely that Georgia, who helped create the rainbow, will have a lasting memory of the day and the sale of the cow helps support the inspiring work of Rainbow Trust Children’s Charity. Children’s imaginations are the most wonderful things and I tried to capture how a child may see the world, colourful and fun. Very simply this represents that sometimes life is sunny and sometimes it isn’t. However the message is one of hope and positivity I hope that Mootilda will raise a smile everyday as Georgia continues to look for rainbows.”

Emma Haines, Director of Marketing and Fundraising, said: “What a lovely end to Mootilda’s journey. We are thrilled she has found a loving home with one of the families who helped paint her. We would like to thank the Watts family for buying her to support Rainbow Trust. We enjoyed following Mootilda’s whereabouts during CowParade and would like to thank sponsors GA Telesis UK LTD again for sponsoring the cow and of course Vikki Gibson for her beautiful design.”