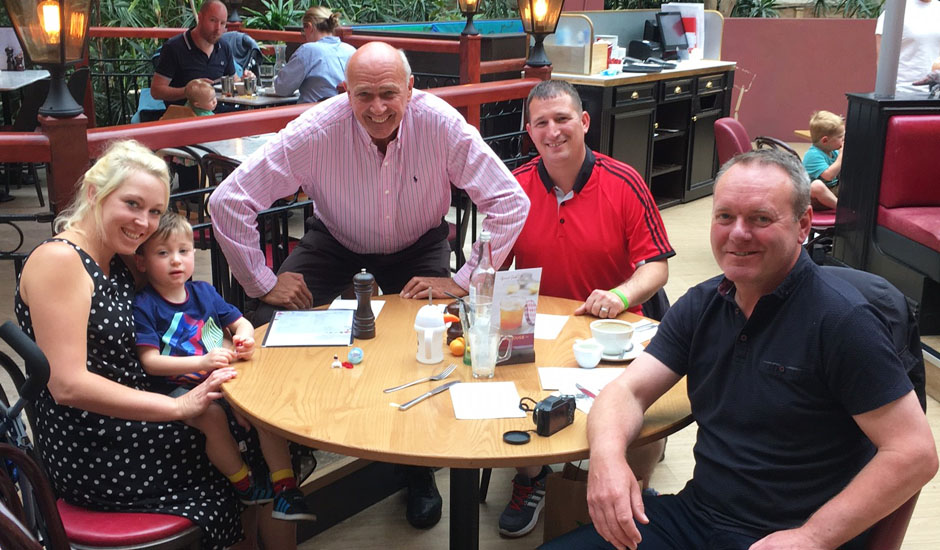 Hanover Dairies in Blaydon, Tyne and Wear, has treated four families supported by Rainbow Trust, to a trip to Centre Parcs.

The company, which supplies milk across the north east, has raised over £200,000 for Rainbow Trust since 2008. Its owner Trevor Hanover, a Rainbow Trust patron, has personally funded the trip throughout June and secured sponsorship from Terry Daniels from London property company Appointmoor Ltd so families could have an unforgettable time together at the Whinfell Forest park, Cumbria.

Each family was given £1,000 spending money and chauffeured to and from Whinfell Lodge for a true VIP experience for their week’s holiday, courtesy of Green Mountain Travel of Cramlington. As one family left the park they met the next family as they arrived for their break.

Trevor was named a ‘Point of Light’ by former Prime Minister David Cameron for his tireless fundraising for us in 2016, plans to send more families to Centre Parcs every year.

Trevor said: “It was unimaginable to us what these families go through and what they have to deal with. I knew that through my business I could potentially raise much needed funds. Hanover Dairies Manager Director, Tony Baldwin, and I had the idea of doing something personally and sending families on holiday for many years. Thankfully this year we have been able to see it happen and it has been a very humbling experience meeting the families and hearing of how they cope. They are truly inspirational people. If anyone out there would like to sponsor a family for next year, please get in touch with us directly as we would love to hear from you.”

Both the Waites and Tate families, said they thoroughly enjoyed their trip.

Amy Tate, mother to three-year-old Jake, from Darlington, said: “The accommodation was lovely and in an ideal position so Jake didn’t have far to walk to the activities. The spending money we were given meant Jake could try things he hadn’t done before, including lots of different foods that he could experiment with. We all loved the pool and the swimming really helped to build Jake’s confidence.”

Lisa Waites, Mum to Joel, five, from Blyth, Northumberland,said: “Joel has been unable to swim for two years because he has had a central line in his chest. It was something he was definitely looking forward to and we discovered he loves the water. Taking Joel horse riding was an amazing experience for him as well as a massive health benefit as it will strengthen his weakened muscles. And another huge highlight for us was relaxing as a family. Over the last two years we’ve spent very little time together as a family and this holiday gave us the opportunity to do that.

Hanover Dairies are determined to continue raising funds for us and their next event will be the Hanover Ball on 4 November 2017 at the Crowne Plaza in Newcastle. For more information on Hanover Dairies, visit their website.