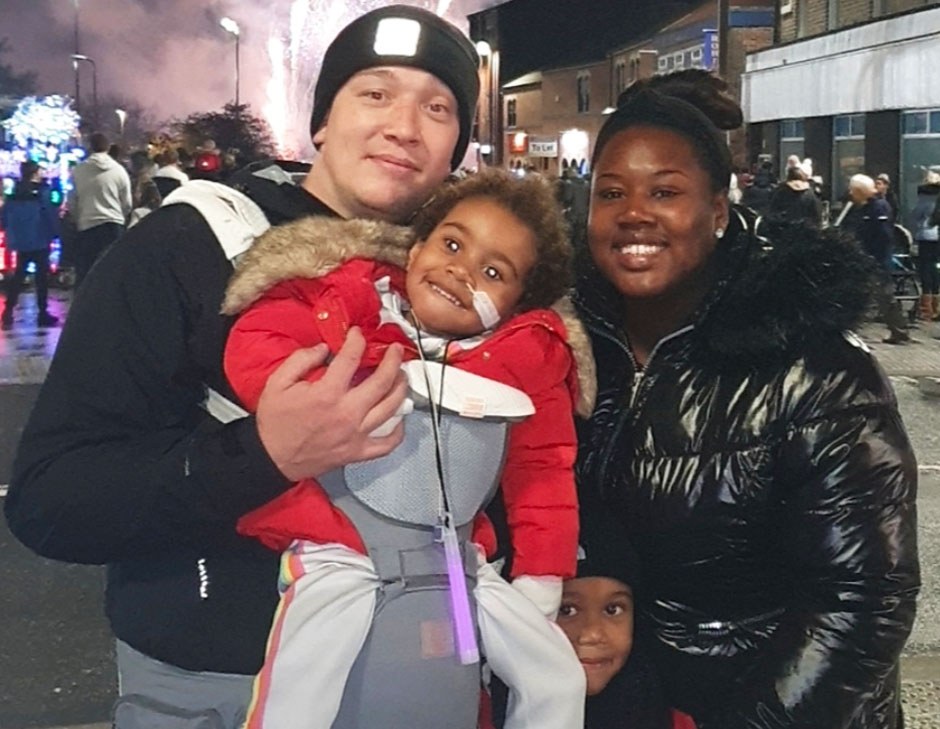 Bereaved parents from Stockton-on-Tees are speaking out in recognition of the support they have received from Rainbow Trust Children’s Charity, following the death of their daughter for National Bereaved Parents Day on Sunday 3 July.

Parents Teissy and Adam Williams’ four-year-old daughter Khianna (Ki Ki) died in March 2020 after being diagnosed in 2019 with a progressive neurological disorder called Leigh’s disease. Shortly after the diagnosis Teissy and Adam were referred to Rainbow Trust and paired with their Family Support Worker, Shelly Duck, who provides emotional and practical support to the whole family, for as long as it is needed.

Now the family are sharing their experiences for National Bereaved Parents Day, which was set up in 2020 to raise awareness and bring together all parents who have lost a child, of any age and any circumstance.

Teissy says, “Rainbow Trust is the only organisation that supported us throughout Ki Ki’s illness and since she died. The stability Shelly has provided us through our grief has been so important and we want the public to know how vital this charity is to families like ours.”

When Rainbow Trust first supported the family Shelly focused on supporting Ki Ki’s big brother Kingston, six, to give Adam and Teissy more time with Ki Ki. Shelly gave him one-to-one time and enabled him to have fun.

Teissy continues, “Shelly would spend time with Kingston to provide an outlet; in their sessions he was able to express how he was feeling and voice his worries and concerns. We started to see a real difference in him. It was evident that Shelly’s support was very beneficial for him and made him feel special.”

Sadly just before the nation went into lockdown in March 2020, Ki Ki died. This was devastating for the family and things suddenly became very different. Routines changed and people’s attitudes changed making the support from Shelly even more valuable.

Teissy explains: “On a normal school run after Ki Ki died people would avoid me, look away and pretend they hadn’t seen me. People feel uncomfortable as they didn’t know how to react to me. They didn’t want to ask ‘Are you alright?’ because of course I wasn’t alright and I will never be. Nothing will ever be the same

“Naturally Ki Ki’s death had a big impact on Kingston who started having night terrors and was having a really difficult time. He is so considerate that he didn’t want to talk to us about what was happening with him and how he was feeling as he didn’t want to upset us. He didn’t want to worry us so he kept it all in so we are so grateful he was able to share it with Shelly.

“While looking after Ki Ki Adam and I had a good routine. All this disappeared when she died. Adam was very angry, very upset. I dealt with it in a different way. I felt sad and depressed. I was mad at Adam for shutting me out. Shelly really helped with these feelings. She explained that there’s no right or wrong way to grieve. His way of grieving was just as valid as mine.”

Teissy continues; “With Rainbow Trust there was a unique difference from other organisations that provided some support; Shelly knew the whole family and what we were all going through. Other organisations didn’t understand the whole situation. With Shelly it was different, she understood everything that we were going through. She really cared. Very quickly Shelly became our constant and stable support.”

Without the support of Rainbow Trust following Ki Ki’s death, Teissy and Adam are unsure how they would have coped with their grief and fully support National Bereaved Parents day this July to raise awareness of parents who like them have lost a child.

Teissy says; “Losing a child is the worst experience a parent can go through. Rainbow Trust and Shelly helped us to accept our loss and to grieve. Shelly also gave Kingston the space he needed to learn to live with the pain of losing his little sister. Anything that helps others understand this process has our whole-hearted support.”

Rainbow Trust supports families who have a child with a life-threatening or terminal illness, throughout the child’s life and beyond through grief and bereavement. The charity pairs each family with an expert Family Support Worker who enables them to make the most of time together, giving them practical and emotional support, whenever they need it, for as long as is needed.

To support Rainbow Trust so that more families like the Williams’ can receive the bereavement support they need please consider donating today.