Enterprise take to the saddle

Enterprise take to the saddle 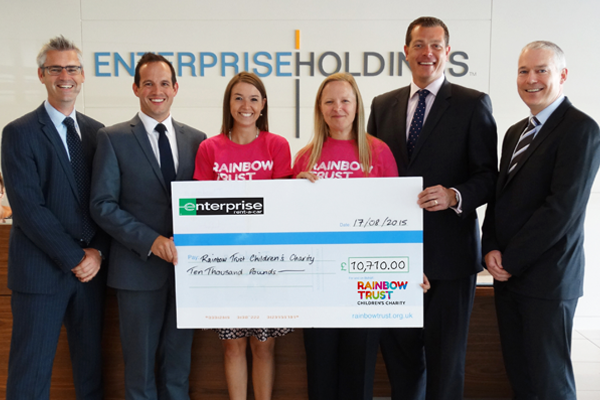 Recently, our Sports Manager, Nicola, and our Senior Corporate Partnerships Manager, Louise, visited Enterprise Rent-A-Car’s head office in Egham, to catch up with a few of their 10-man RideLondon 2015 team. During the visit, Enterprise presented Rainbow Trust with a cheque for a whopping £10,710! A fundraising total which will fund 489 hours of support for families in the care of Rainbow Trust. The total raised was from a combination of customers, colleagues and the Enterprise Holdings Foundation, which is Enterprise’s philanthropic arm.

Last month, 90 colourful Rainbow Trust jersey wearers brought some colour and a whole lot of team camaraderie, as they took part in the Prudential RideLondon 100. More than 25,000 cyclists took to the roads of London and Surrey, riding 100 miles to raise money for their chosen charities.

Among this sea of lycra-clad bikers, a sub-team of 10 employees from Enterprise and some of their friends from the insurance industry, proudly led the way for the Rainbow Trust team, giving the cheering squads a wave and a smile as they rode by.

Enterprise Rent-A-Car have been proud supporters of Rainbow Trust since an introduction via networking partner, I Love Claims, in 2011. Since then, Enterprise have been involved in a whole array of fundraising, from wearing red to work, to sponsoring the charity’s entry into the AGS/HBC Gumball Rally this year.

‘Supporting Rainbow Trust is an absolute pleasure, and I am delighted that so many of my colleagues get behind the cause in so many different ways. Riding 100 miles was a huge achievement for the Enterprise team, but raising over £10,700 was an even bigger accomplishment. Bring on 2016!’ said Stuart Sandell, Head of UK Insurance Division, Enterprise Rent-A-Car.