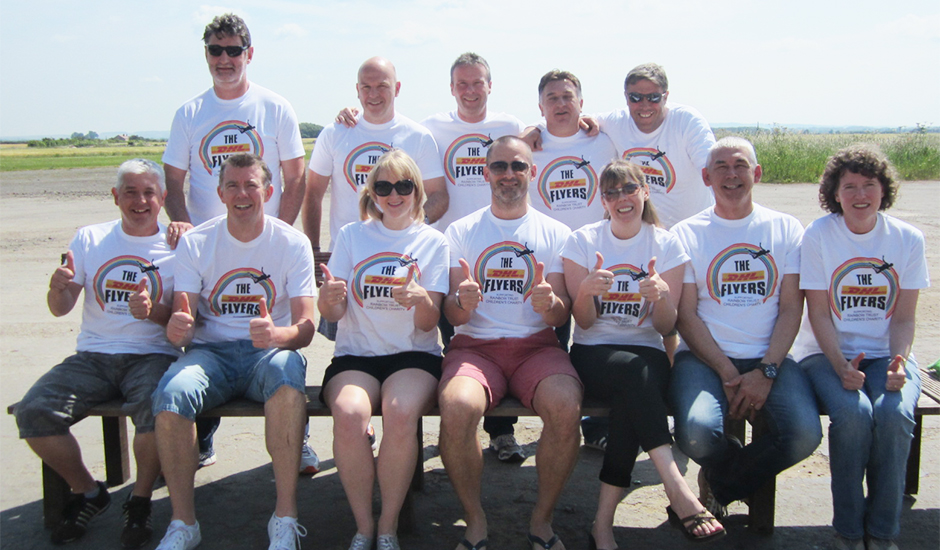 On Monday 23 June nine brave UK Senior Operations Managers from DHL (aka the DHL Flyers) took to the skies to show their support for Rainbow Trust.

The team went through skydiving training before heading out to the plane, strapping themselves to an instructor and travelling 15,000 feet into the sky before throwing themselves into the air. Freefalling at 120mph before pulling the shoot and gliding gracefully to the ground, each Flyer landed with huge smiles and a new found interest in adrenalin sports!

The team has been busy fundraising in the run up to their jump, raising over £5,700 so far, and as they collect in pledges they are hopeful to get over £6,000 before applying for match funding from the DHL Foundation.

“Bravery is the key word I think. I have to admit, a number of our Flyers were more than a little nervous on the ascent but, without exception, everyone thoroughly enjoyed the experience! The ground swell of support within all areas of DHL was superb and with the funds raised we will be able to support up to 300 hours of care for families who have a child with a life threatening or terminal illness, which was the key driver behind our madness!”

Rainbow Trust extends its thanks to the DHL Flyers for all their fundraising efforts and to DHL and the DHL Foundation for their continued support.

Watch this space for the next UK Senior Operations Managers challenge!