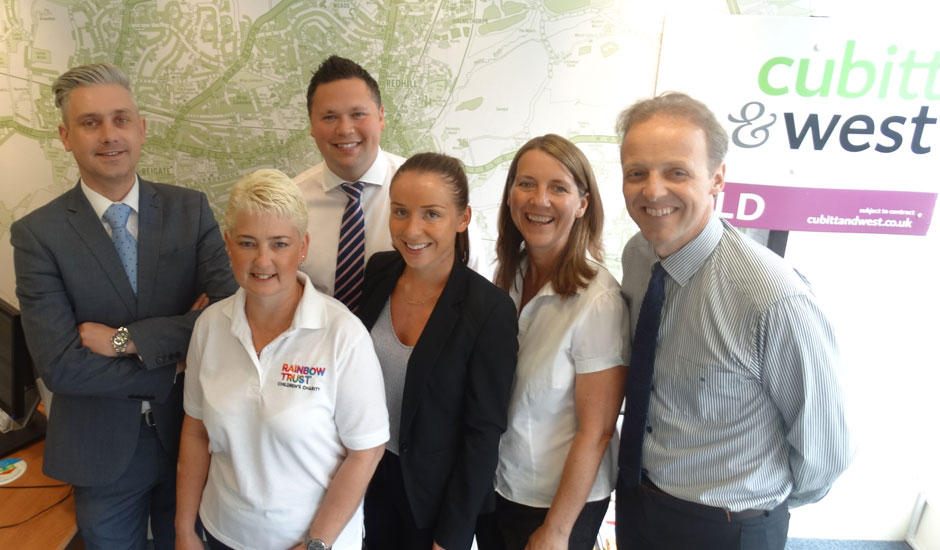 Estate agent Cubitt & West has announced its funding for one of Rainbow Trust Children’s Charity’s vital Surrey care team. On 10 June, staff at Leatherhead, Dorking and Reigate branches had the chance to meet Family Support Worker Nicki Phelan and hear more about her role supporting families with a life threatened or terminally ill child.

Nicki talked about the impact Rainbow Trust has on local families caring for a seriously ill child. Our Leatherhead based care team offer bespoke care to over 150 families in Surrey and surrounding counties, helping them to cope in extreme and uncertain situations, so that they do not have to cope alone.

Cubitt & West, the largest estate agent in Surrey, Sussex and Hampshire, will fund Nicki’s vital role for a year through its Community Foundation Fund. A further £11,000 will be raised through staff fundraising, including employees from all 15 branches taking part in The Nuts Challenge, a seven kilometre army assault course on 4 September.

“We are so grateful that Cubitt & West has made such a fantastic commitment to fund Nicki’s role in our 30th milestone year. It’s going to be a great partnership and we are looking forward to supporting the branches in raising vital funds and awareness for Rainbow Trust”.

“We have been supporting the Rainbow Trust for over 10 years now and have the utmost admiration for Nicki and her co-workers, the care they provide is second to none.”

Rainbow Trust is celebrating our 30th anniversary throughout 2016. We rely almost entirely on voluntary donations and thanks to its generous supporters it has helped over 2,000 families in England.

To find out more about sponsoring an Family Support Worker, visit rainbowtrust.org.uk/more-amelias, or to speak to one of our Corporate team about a partnership call 01372 363 438.