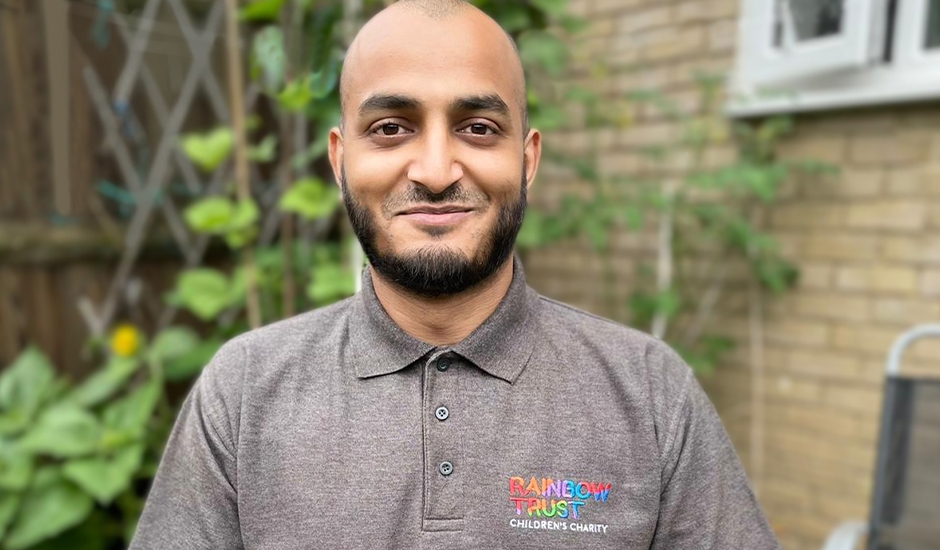 Very shortly after Zak joined Rainbow Trust in 2011, he started supporting Ruby’s family when she was four years old. Ruby’s mum, Lauren, had learnt during her pregnancy that she suffered from the heart disease cardiomyopathy. This life-threatening, inherited condition affects the heart’s ability to pump blood around the body, and unfortunately Ruby also inherited it.

Lauren was referred to Rainbow Trust because she had no support and she was struggling to cope with anxiety, managing Ruby’s condition and needs and dealing with her own condition.

For the last 10 years Zak has helped, and continues to do so, in many practical ways.

Ruby is now 14 and has a younger brother, Austin, who is six years old. As the condition Lauren and Ruby have is genetic Austin has the same appointments and checks until doctors can be sure he doesn’t have cardiomyopathy.

Over the years Zak would drop off and pick up Ruby and Austin from school, take the children to the park for activities and games, and support the family at home by playing, cooking and assisting with anything that the family might need.

Zak often helps them with their shopping too because, due to the cardiomyopathy, Lauren and Ruby can’t do prolonged physical activity so even going to the supermarket is testing and large crowds also trigger anxiety in Lauren.

The family has benefited from the emotional support given by Zak. Austin can open up to Zak, telling him about his problems, and sees him as a positive male role model. Over the past 10 years Ruby has shared her ups and downs with Zak and counts on Zak for additional emotional support when she needs it. Zak has been fundamental in helping Lauren cope with her anxiety.

Over time, Zak has managed to build a strong and stable relationship with Lauren, Ruby and Austin. The level of confidence and acceptance is very strong and is evident in many ways, not least when both Ruby and Austin have appointments for scans and procedures in hospital at the same time: Zak drives the family there, so Lauren doesn’t have to worry about traffic and parking, and then Lauren takes one child to their appointment and Zak takes the other one. A real testament to the vital work Family Support Workers like Zak do every day.

Congratulations, Zak, on your 10 year work anniversary and thank you for all your hard work.