70 year-old set to cycle from Swindon to Barcelona

70 year-old set to cycle from Swindon to Barcelona 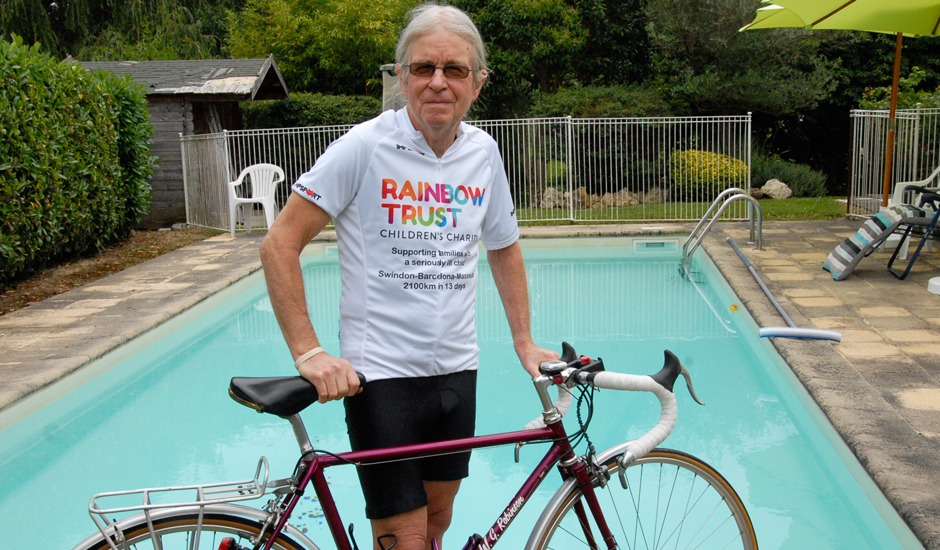 Today, 70-year-old Mike Sheppard will be enduring the ultimate challenge when he cycles over 1,300 miles, travelling from Swindon to Barcelona and on to his home in Masseube, France.

Mike, who lived in Wiltshire for 30 years, celebrated his 70th birthday last year and decided to complete the ride to mark the occasion, but wanted the journey to have a real purpose. In November 2014, Mike saw Rainbow Trust on BBC Children in Need and was ‘emotionally touched by the work it does’ and decided his challenge would be in support of the charity.

“I am moved to fundraise for any cause related to children, as they are the future. The appeal film from Rainbow Trust just really touched my heart. Seeing the difference the charity made to those families’ lives led me to decide my next challenge would be in support of the work they do.”

This isn’t the first time Mike has undertaken this challenge. Back in 1992, he and 11 other riders completed the same route. 23 years later, he has chosen to replicate the journey, except this time he will be riding solo, with no support team.

“I want to prove to myself that I can still do such a ride and finishing will be incredibly satisfying, especially now that I’m 70. The biggest achievement for me, and just as important though, is that I will have helped gain much needed funds for Rainbow Trust.”

Mike will begin the long journey in Swindon and will cycle to Portsmouth to catch the ferry to Cherbourg. The following day he will see the French part of the ride commence and aims to make the trek to Barcelona in nine days before continuing on for another three to reach his home in Masseube.

Training has become an important part of Mike’s daily routine since March 2015 and he has completed over 2,500 miles in preparation. Through the support of his friends, family and his church communities in the UK and France, Mike is aiming to raise over £1,000 which is the equivalent of 44 hours of care from a Family Support Worker. He will also be wearing his charity jersey en route in the hope to raise awareness and gain support from members of the public who he is relying on to give him a boost!

“I am proud to be doing this challenge in support of a brilliant charity and will do my utmost to raise as much as I can. Remember, all you fundraisers out there, anything is possible if you just believe in yourself, we can all do so much more than we think.”

“We’d like to thank Mike for his dedication towards our cause. He has put in a lot of training for the tough challenge ahead and we are so grateful for all his efforts for helping us raise awareness of the work Rainbow Trust does. It’s down to the generosity of our supporters that we are able to continue raising vital funds to support families in need.”

Rainbow Trust’s Swindon Care Team currently supports 125 families across the South West including Bath, Bristol, North East Somerset, Wiltshire and Oxfordshire. Each family has a dedicated Family Support Worker who is with them from diagnosis to cure or end-of-life care and bereavement, for as long as needed.