Zachary and his family 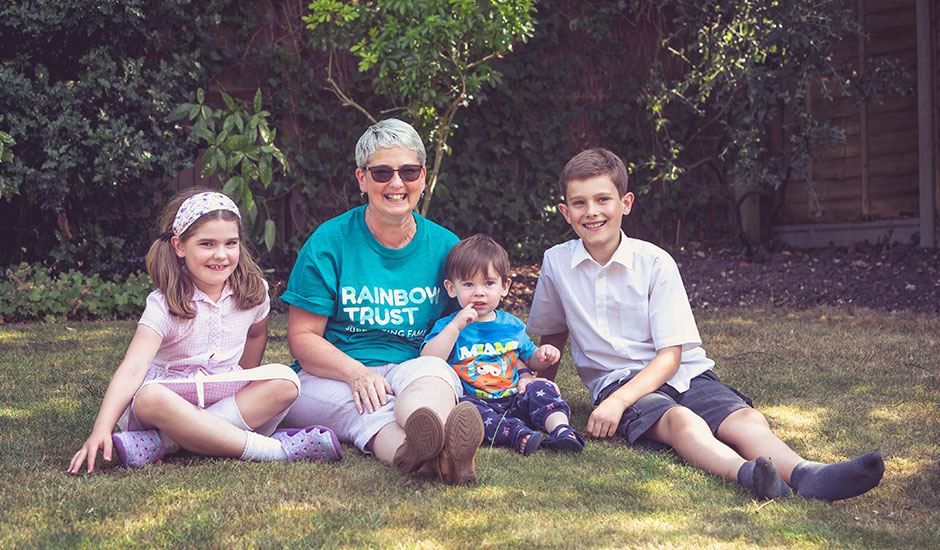 Clare and Ben have three beautiful children; Connor, Esther, and Zachary. This is Clare’s story.

When Esther was six-weeks-old, we were called back for a routine blood test and we found out she was very poorly. Looking back at photos, she was definitely pale. Diamond Blackfan Anaemia (DBA) was mentioned. It’s an extremely rare disease, only 125 people in the country have it.

Esther had a blood transfusion every month for the first year of her life – it’s like putting petrol in the car, it became normal.

We are constantly planning around her needs and being her champion as DBA is so rare that the specialist doesn’t know everything, so I keep in touch with Facebook groups and other mums of children with DBA.

It’s never being able to relax. We have to be agile to manage whatever comes up because not enough is known about DBA, nothing is normal.

Zachary was a surprise pregnancy. When he was three months old, we found out that he was affected with DBA as well. It was a huge shock and it knocked us off course as a family as we were told that Esther having DBA was a one-off.

We thought we’d have a year of blood transfusions, but he wasn’t the same as Esther. At five months when he went into hospital, not knowing what was wrong with him or when we’d come out.

We needed a team, I knew we couldn’t do this on our own. My mental health wasn’t great, I hadn’t had any sleep, I didn’t know if I was coming or going.

Nicki from Rainbow Trust offered to come to hospital appointments with us. That was amazing but the support is more than that, it’s the emotional support, being able to chat to Nicki makes such a difference. I’ve isolated myself in looking after two children with complex needs and an 11-year-old. But with Nicki’s help, we feel human again, having someone there for just us, somebody who’s independent and professional who understands. It really does fill that gap when you have a family in crisis.

Nicki comes to Esther’s hospital appointments with us, she collects us at 5:30am and stays with us all day, some evenings, till 7pm.

I wouldn’t have been able to do hospital visits alone. Without Nicki, we’d have had to book taxis up in London and I wouldn’t be able to leave Esther’s bedside to get a cup of tea or take any kind of break.

It’s so hard being up in hospital all day and then coming back to having a full-on family life and having the agility of managing children with complex needs. Without Nicki, we’d still be really struggling.

Connor as a young carer

Connor has seen so much I wish he hadn’t. He still talks about the time he came to visit Zachary at the hospital when we didn’t know what was wrong or when he’d be home. He walked in to see Zachary with a blood transfusion going into his head as that was the only vein they could find. He was on a drip and I was holding this baby not knowing what to expect.

It’s affected him and he still talks about it. He loves his little brother.

We’ve had to register Connor as a young carer as he helps out so much and he puts up with a lot of flak from a younger sister on steroids. It affects her mood, endocrine system which is responsible for hormone production and cell processes. As a registered carer, if homework is missed, the school will understand, and he won’t have to keep explaining what’s going on at home.

We’ve been to Bockett’s Farm with Rainbow Trust which is not something I would have had the energy to do – the children had a lovely time. We got to meet other families that they support which was great for the children and me.

For us, having Rainbow Trust and Nicki has been fantastic, just having someone there for us. I can talk to Nicki about anything, she helps normalise life for us. She does arts and crafts with Esther in hospital on her long days and spends time with Connor – it’s amazing the level of support we get from Nicki and knowing it doesn’t just end is such a relief. She knows we don’t know what the future holds and we are so very grateful for her support.

Please donate today, so we can continue to support more families, like Zachary's.