Meet Phoebe and her family 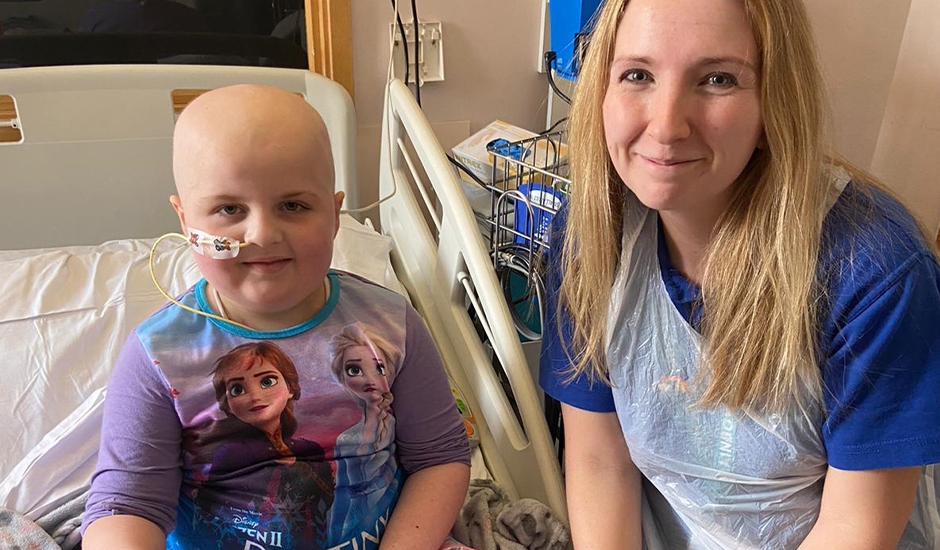 Phoebe was just 14 months old she was admitted to hospital for various infections. When the consultant told her family that she had leukaemia, their whole world came crashing down.

Phoebe spent the next two months in the oncology ward, very ill. Her parents, Aimee and Nathan, also had a three-year-old son, Ollie, to take care of. Because of this, Nathan couldn’t go back to work after Phoebe's diagnosis. Whilst they tried to keep things as normal as possible for Ollie, a lot of time was spent separated as a family whilst either Aimee or Nathan stayed in hospital with Phoebe.

A nurse on the ward referred the family to Rainbow Trust and, soon after, Rainbow Trust Family Support Worker, Amelia, started supporting them. Amelia provided sibling support to Ollie playing, looking after him and comforting him. Aimee said:

It was such a weight off my shoulders knowing that she was looking after Ollie so that I could be with my sick child. Ollie loved Amelia and she would collect him from school and take him home to play, bring him up to hospital so he didn’t have to be there too long but also so I could see him and give him a hug.

Phoebe had chemotherapy every day for two and a half years and trying to split time between her and Ollie was really hard for their parents. Phoebe was in hospital for so long but with Amelia's support Ollie became a happier child, more confident and also more settled. Amelia not only gave him play time and fun but emotional support - she was there especially for him and this made a huge difference.

This news was a hard blow to take after what Phoebe had gone through already. It felt so unjust and overwhelming. I was heartbroken.

This time, the family were told that Phoebe would need a bone marrow transplant. They were faced with a major medical procedure, the risk of side effects and the prospect of Phoebe being in isolation at the hospital for at least six weeks. Children are not allowed to visit during a bone marrow transplant, so Phoebe would be separated from her brothers - Ollie and her youngest brother, Myles - during this time.  Aimee and Nathan had to make the hard decision of splitting themselves to care for their children: one parent with Phoebe in hospital, and one parent with Ollie and Myles.

The support they had received before was mainly for Ollie, to help him in dealing with the difficult emotions and disruption of having a seriously ill sister. But, this time,  Aimee knew that support would be needed more for Phoebe - so that she had some company in hospital - and for Aimee to be able to have a break from Phoebe's bedside every so often.

Rainbow Trust Family Support Worker, Charlotte, started visiting Phoebe regularly at home on the lead up to her bone marrow transplant – which was scheduled for last December - to get to know her. Charlotte and Phoebe played with playdough, watched music videos and played board games whilst also talking and sharing feelings and emotions.

But then, on 1 December, Phoebe became seriously unwell due to a virus and was admitted to intensive care. Phoebe was not able to talk or walk and slept for most of the days.  Aimee said:

We were devastated and very frightened. Phoebe nearly went into a coma. She became almost partly brain damaged. Her brain shut down and she would just lie there and not communicate. We thought that we were going to lose her. For a while, the doctors could not work out what was happening and told us to prepare that Phoebe may not get better.

Charlotte was by my side. Instead of sitting by Phoebe’s bedside, Charlotte focussed on me and my emotional and physical wellbeing at this horrendous and very scary time. Charlotte helped me to cope with the uncertainty of it all.

Then, the day before Christmas Eve, Phoebe finally woke up.

We didn’t wake up on Christmas Day to do the things that I would’ve loved doing with my family. We didn’t have a special Christmas, all together as a family, at home.

I think the hardest part was for me, knowing that this is not the way it should be for a family at Christmas time.

Phoebe and Aimee managed to get home for New Year and spent a short while together with the rest of the family before heading back to hospital on 18 January to prepare for the bone marrow transplant.

Whilst isolating in hospital, Charlotte began visiting Phoebe twice a week to provide emotional support through play and allow her time to talk about her worries. During these visits Nathan and Aimee would take the time to go outside, do some exercise, or take the rare opportunity to have lunch together. Charlotte enabled them to have time to talk to each other, to decompress and process what their family was going through.

Whilst Phoebe and Aimee were in hospital away from their family for nearly six weeks for the bone marrow transplant, Charlotte also organised some days out for Ollie, to give him some respite and a chance to meet other children in his situation.

When COVID-19 hit, most people had an insight into what families like Phoebe's - living with childhood illness - face every day: uncertainty, isolation and fear. Phoebe and her family had spent six weeks in hospital, split as a family, and then faced the foreseeable future in isolation, shielding at home, due to the pandemic.

During the first lockdown, Charlotte adapted her support to Ollie, playing with him over Zoom to give him a bit of distraction and dedicated time. Myles also joined the Zoom calls - he would take over and enjoy some one-to-one time as well.

My heart filled with joy hearing Charlotte on Zoom calls with them, when they all laughed and seemed happy and unaware of what was going on, both with Phoebe’s illness and with lockdown and the pandemic.

After coming home in March, Phoebe became really ill again and ended up in intensive care. And, unfortunately, the same happened this September. The reality is that, since September 2019, Phoebe and Aimee have been at home - and not in hospital - for only eight weeks. Cancer does not stop for Coronavirus.

Throughout all this time, Charlotte has provided bespoke emotional and practical support, also innovating and adapting amidst a global pandemic.

Please donate today, so we can continue to support more families, like Phoebe's.