Meet James and his family 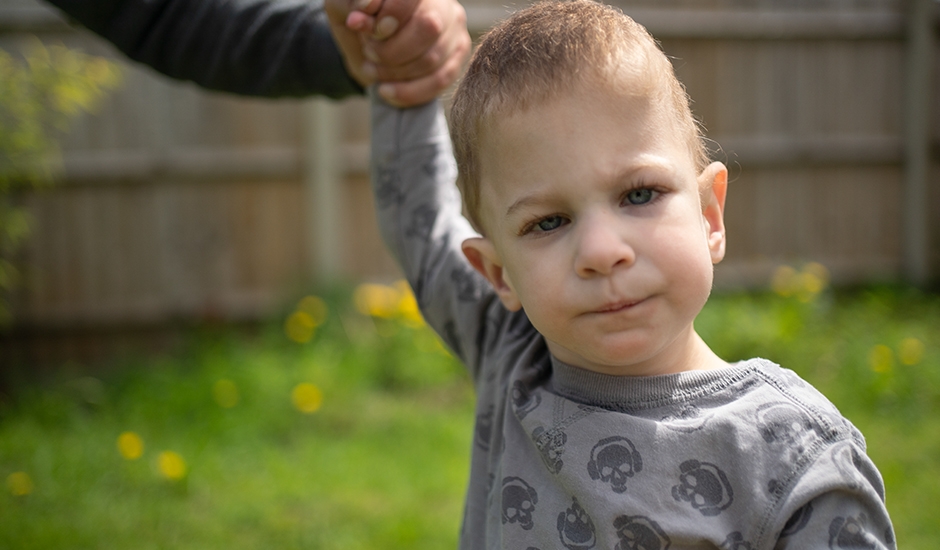 Family Support Worker Ema supports James’ family as they deal with his complex needs. Nothing prepares parents to deal with childhood illness so Ema is helping to improve the family’s quality of life.

During a pre-eclampsia examination at 28 weeks, when Danielle was pregnant with her second child James, the doctors discovered that the baby’s heart beat kept dropping to a dangerous level, unable to bring it back up. Danielle had to be induced, which meant James was born 12 weeks prematurely.

James was in hospital for the first four months of his life. When he was finally discharged, he needed home oxygen treatment and to be fed through a tube as his breathing is compromised due to suffering chronic lung disease.

Since birth James has had complex needs and requires looking after 24 hours a day. He is non-verbal, has low muscle tone and is unable to eat or drink anything.

“The world stopped when James was born as we weren’t expecting a child with such complex needs. He weighed just 1lb 4oz. James had a bleed on his brain at three days old which has caused cerebral palsy, development delay, visual impairment, hydrocephalous1 and many other conditions.”

Danielle and her husband Chris heard about Rainbow Trust through their Community Nurse, and they have now been receiving support from Family Support Worker Ema for nearly three years.

Ema met James when he was eight months old. Her support was originally mainly for James and his now nine-year-old sister Bella, who found it hard with James being in and out of hospital. Ema has been helping them to have fun despite the day-to-day difficulties they face. These play sessions also provide an opportunity to give emotional support to both children. For Bella monthly one-to-one sessions give her focused “me” time. These sessions have boosted both children’s confidence and social skills.

“Bella enjoys it when Ema comes over to see her, as she finds it hard to build relationships with other people. She has been diagnosed with autism, and without Ema’s help we wouldn’t have spotted the signs and pushed for an assessment and support at school, which she now has.

“Ema has made our life easier as we have been able to do things as a family. She has made our daughter feel special.

“James prefers to play on his own, but he is also building his social skills with Ema and will choose to play with her, he has started to initiate play."

Ema also helps to improve the family’s overall quality of life by providing much needed emotional support for Danielle at home and over the phone. Danielle was diagnosed with Post Traumatic Stress Disorder (PTSD) due to the trauma of James’ birth, the difficult first few days of his life and his numerous conditions. With both counselling and Ema’s help Danielle has started to overcome her PTSD. Ema’s emotional support has focused on helping Danielle to have more confidence in general and specifically around looking after James, empower her to share more responsibilities with her husband, Chris, and to allow herself more time to heal emotionally.

Over the last three years, James has been in and out of hospital. This, together with the numerous medical appointments, presents many challenges for the whole family. As the family waits for a mobility vehicle Ema provides transport so they don’t have to worry about booking and paying for taxis, traffic jams and delays and can just focus on James.

As James’ brain is so fragile a fall on a hard floor could be very dangerous so Ema helped the family to secure funds to lay carpet throughout the whole house.

At the end of 2021 James started passing out, losing control of his limbs and body and, as he is non-verbal, he was pressing the back of his head with the palms of his hands. Unable to express what was happening to him this showed he was having pain and discomfort. This was due to a cyst on his brain. The cyst was causing a blockage and fluid was accumulating, increasing pressure in his brain.

Because of this, James recently had to undergo two brain surgeries. The seriousness of the operations was made clear to Danielle and Chris when they were told that if anything went wrong James could end up paralysed or could have a stroke.

Ema picked them up from home at 6am, dropped them off at the hospital at 7:30am for the first operation. Two weeks later James was in pain again and the local hospital sent him in an ambulance, on a ventilator, to John Radcliffe hospital as an emergency. There was so much equipment that there was no room for Danielle in the ambulance. She was told to make her own way – so Danielle called Ema, who was able to help and took her immediately. Fortunately, the operation went well and James went later to continue his recovery.

“Rainbow Trust makes you realise that you’re not alone and that there are many other families who are in the same situation. The Family Support Workers can guide you to a more positive outcome in your life.

“Ema has gone above and beyond to help us. Ema is our own Nanny McPhee!”

Please donate today, so we can continue to support more families, like James'.