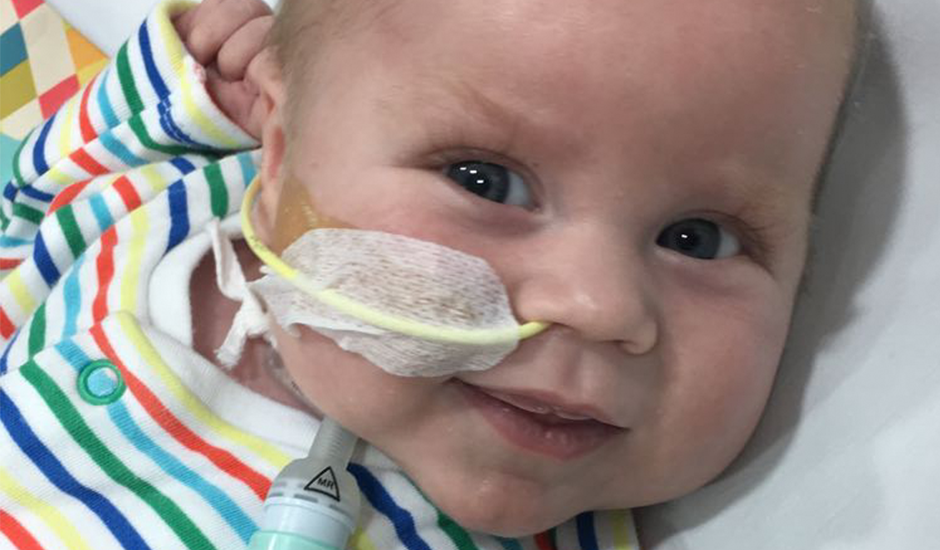 Lauren shares her experience of bereavement and of the support Rainbow Trust offered to her family at such a traumatic time.

"My partner, Richard, and I were told our baby had a heart problem at our 20-week scan. The sonographer told me that the left side of his heart looked smaller than the right and I feared the worst. I was very scared.

"They referred us to a specialist at the Newcastle Royal Victoria Infirmary. We had a call the same day to book an immediate appointment and scans confirmed the sonographer’s concerns. The consultant said that Cole’s heart hadn’t formed properly, showing me pictures of how a normal heart works and what was wrong with Cole’s.

"I was devastated, I felt numb. He explained that Cole had hypoplastic left heart syndrome, which is where the left ventricle of the heart does not develop properly. He said that it is a life-threatening condition and that Cole would need surgery immediately after birth or he would die. He also explained that some parents choose to terminate the pregnancy or not to have surgery but I knew I couldn’t do that. I knew I wanted to give Cole every chance.

"Cole was born weighing 7lbs 7oz. When he was just three days old, they attempted a procedure that tries to create a new circulatory system. It was the first of four operations in which surgeons tried to reconstruct the heart and insert a stent to help blood flow to the lungs. During the procedure, something didn’t go according to plan and they had to put Cole on life support. They told us to prepare for the worst.

"At the fourth attempt they managed to fit a stent in Cole’s aorta, finally giving him a chance of survival. Over the next few days he improved and, when he was 14 days old, doctors gradually weaned him off life support. He was still very unstable, and we were filled with worry. All of this was an emotional rollercoaster. I was in a bad place."

Invaluable help in the hospital

"A hospital social worker referred us to Rainbow Trust and when Cole was 17 days old Family Support Worker Sian started supporting us. Sian would come to the ward, help with Cole’s personal care needs and look after him.

"We also have a daughter, Esme, who was three years old at the time, and we needed to be with her too. Neither Richard nor I drive, and the hospital is a 70 mile round trip from our home, so we couldn’t be with Cole all the time. Sian being there helped ease the worry and constant concern about Cole and she would usually send photos and update us on how Cole was doing.

"Cole remained in intensive care for three months but his health improved little by little. Sian would sing, read books, play with toys, play with musical instruments and sensory toys with Cole, to keep him entertained and help his development.

"Then, Cole was moved on to a ward. He needed another operation to widen the stent in his heart and in time he would also need a heart transplant. At six months old, Cole went on the waiting list and, two months later, in early March last year, he had a heart transplant. This filled us with hope for him.

"Just before the first national lockdown we were told Cole could have no visitors other than me and Richard for three months due to COVID-19, but we had to self-isolate for three days, waiting for COVID-19 test results, as Esme had a temperature. This was worrying because, due to COVID-19 restrictions, Sian couldn’t visit the hospital. No one else could be there.

"At the end of March, Cole very sadly went into renal failure and died. We were there with him. It was the most painful experience."

"To begin with Sian helped support us in our grief by visiting us on our doorstep delivering memory boxes and activities for Esme. This support continued as she would check in and talk to me via text message.

"Sian also helped source a £300 fund to help with funeral costs. She sent us a special card, as she couldn’t attend the funeral due to lockdown. We were touched that each Family Support Worker in the team lit a candle in their own home. It was lovely to see that Cole was being remembered in this way and that we were in their hearts at such a horribly sad time.

"In May Family Support Worker Sabrina started to offer bereavement support. Sabrina did doorstep visits to deliver activities and referred us for a holiday to charity Ruddi’s Retreat as well. Sabrina regularly texted me for emotional support and we had long conversations because we couldn’t have sessions face to face due to the ongoing restrictions. I really benefitted from being able to talk things through by text.

"Family Support Workers Sian and Sabrina have been a light at the darkest of times. They’ve supported me and my family when we faced the worst."

We provide bespoke, continued support to families who have experienced the devastating loss of a child. Please donate today, so that we can be there for more families, like Cole's.

The loss of a child is the hardest thing any parent can experience - but they don’t have to go through it alone.

We provide bespoke continued support to families, helping to negotiate life after a bereavement. We offer emotional support to the whole family, including support to siblings, at the hardest time.