Meet Belle and her family 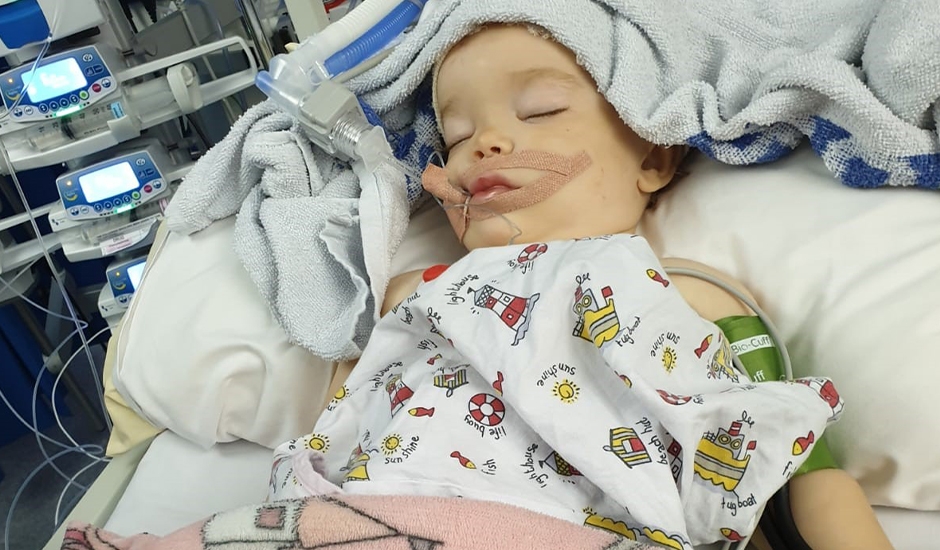 Belle was our rainbow baby. She is our only girl and the youngest of five children.

At the age of seven months Belle became incredibly irritable. She begun to regress in her development and was continuously in and out of the doctors and hospital.

At around 10 months old she began vomiting randomly and sleeping more. This continued over the next few months, gradually getting worse. Her head began to grow so much that she could only wear clothes that had buttons so the opening was wide enough for her head to get through. By 14 months Belle slept for 23 hours a day, only waking for pain relief and a bottle. Her development had ceased and her head tilted and drooped.

My husband, Lee, and I took Belle to our local hospital many times but we got no answers, despite the severity in her decline.

In a last attempt, desperate, we took Belle to Southampton General Hospital. She was so unwell on this admission that an MRI was ordered that night.

Lee and I were devastated to be told that our 14-month-old girl had a brain tumour that was now so large it occupied two thirds of her brain. Belle immediately underwent seven hours of surgery, which saved her life. They were able to fully remove the tumour, but Lee and I were told she would never walk or talk as to get at the tumour they also had to remove a quarter of her brain. This was so painful to hear and we were devastated.

We didn’t know that the hardest part was to come, though. Due to the high grading of Belle’s tumour she required 14 months of intensive chemotherapy.

This was worse than all that we had endured already, which probably says a lot. During this time Belle was seriously unwell and it was heart-breaking to witness.

At this point we were referred to Rainbow Trust for support. Our Family Support Worker Mandy has been wonderful. It was a huge relief for me to have Mandy’s support, to know that we all have someone to openly talk to.

Mandy was also able to come to hospital and give me and Lee emotional support while Belle was admitted. This was incredibly helpful. Mandy quickly became a huge part of our lives and is always compassionate to our needs. There have been so many ups and downs during our cancer journey and Mandy has been there throughout.

The pandemic has been incredibly hard for us. As Belle has been having chemotherapy, her immune system is very weak so we had to shield. Having five children at home, unable to go out was a nightmare. The boys would constantly argue and we were all on top of each other. Additionally, I tried to juggle home schooling the boys with caring for Belle. At times it felt completely overwhelming.

Mandy was amazing. She has worked with our other children to give them time out from an incredibly traumatic experience and has given emotional support at school for them.

And she has been there for me too: I was always able to talk to Mandy when things were getting too much or when we had updates from the hospital that I wanted to talk through.

I don’t know how we would have managed without Rainbow Trust’s support.

To our delight, Bella did start to walk and talk and hit milestones in line with her age. This is beyond anything we could have imagined, given she has a large proportion of her brain missing. And she has continued to surpass and surprise all who know her.

Belle finished treatment in August 2020 and has continued to flourish. She is walking and talking, which fills us with joy. She is the essence of a real-life superhero. At the moment, Belle is disease free and living her best life.

Mandy has provided emotional support to our whole family throughout Belle’s illness. She now visits us at home to support and help us find our feet in our ‘new normal’.

Things would've been very different without Mandy by our sides.

Please donate today, so we can continue to support more families, like Belle's.