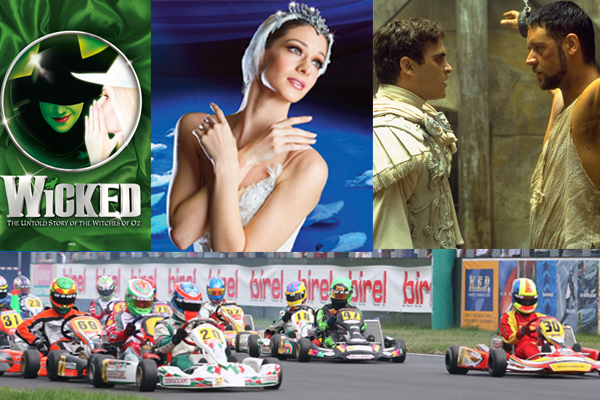 Bids are taken by emailing sophie.collins@rainbowtrust.org.uk by Friday May 20 at 6pm. The successful bidder will be notified early the following week where you will receive instructions on how to make your payment.

Maximus Decimus Meridius will have his vengeance again, accompanied by an on-stage orchestra, as Gladiator Live returns to the Royal Albert Hall due to staggering popular demand.

Ridley Scott’s legendary swords-and-sandals epic is coming back to the iconic London venue – its auditorium famously based on a Roman amphitheatre – following four incredible, sold-out shows in 2014.

The event will see Gladiator screened in high definition on a 20m screen, as Hans Zimmer’s stirring score is performed live by the Royal Philharmonic Concert Orchestra and English Chamber Choir, with guest vocalist Lisa Gerrard, who features on the original soundtrack. Conducted by Justin Freer.

The production caused a sensation at its world premiere in 1997 and has since been enjoyed by over 500,000 people, captivating audiences worldwide.

True love triumphs over evil in this powerful story set to Tchaikovsky’s memorable score played by the English National Ballet Philharmonic. With 60 swans, stunning costumes and sensational lighting, experience a choreographic kaleidoscope as the Royal Albert Hall is transformed into a magical lake for this unrivalled dance event.

From the lakeside seats to the top of the Hall, this in-the-round production of the world’s favourite ballet combines sensational spectacle, compelling drama and touching intimacy.

Try out the UK’s longest indoor go karting track, spanning a massive 1050 metres. There is ample room for overtaking throughout the circuit, with an average track width of 7 metres you’ll have every opportunity to speed past your friends. The indoor go karts from RiMO reach speeds of up to 45 mph and are also used by the prestigious Michael and Ralf Schumacher tracks in Germany.

Usual cost of this experience is £55 per person. Experience to be used before 22 September 2016.

To celebrate any occasion!

A signed framed Harlequins shirts, signed by all the team, current season and professionally framed.

Harlequin Football Club are an English rugby union team who play in the top level of English rugby, the English Premiership. Their ground in London is the Twickenham Stoop. They were one of the founder members of the RFU.

Wicked tells the incredible story of an unlikely but profound friendship between two girls who first meet as sorcery students at Shiz University; the blonde and very popular Glinda and a misunderstood green girl names Elphaba.

Following an encounter with The Wonderful Wizard of Oz, their friendship reaches a crossroad and their lives take very different paths. Glinda’s unflinching desire for popularity sees her seduced by power while Elphaba’s determination to remain true to herself, and to those around her, will have unexpected and schoking consequences for her future.

‘One of the greatest musicals of our time’ Daily Mail

Get Social with us